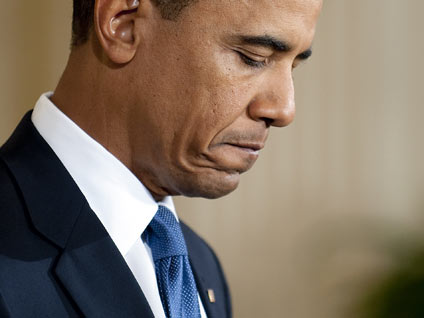 Ask Republicans why they're so optimistic these days, and they'll tell you it has a lot to do with the fact that the country has turned against the Democratic Party. President Obama's approval rating is below 50 percent; the Tea Party movement is dominating the headlines; and commentators anticipate significant losses for Democrats in the midterm elections.

So here's something that might surprise you: The Democrats might not be beloved, but they're still the most popular kids in school according to the latest CBS News/New York Times poll. In the poll of registered voters, Democrats had a 42 percent favorable rating to the GOP's 35 percent. Asked who has the better ideas for solving the nation's problems, 40 percent chose the Democrats, while 33 percent said Republicans.

So why do things look so bleak for the Democratic Party? Because polls suggest that voters who plan to actually vote this year tend to lean Republican. (This phenomenon is known as the "enthusiasm gap.") Less than half of registered voters are expected to make it out to vote in November, and it is backers of Democrats who look more likely to stay home. (Other polls have also found a slight edge toward Democrats among registered voters overall, while Gallup's generic ballot survey shows them split for the midterms.)

For a sense of how this plays out, consider two recent polls of the New York governor's race. One poll last week from Siena showed Democrat Andrew Cuomo, who had been expected to cruise to an easy victory, with a 33 point lead over Tea Party-backed Republican candidate Carl Paladino; another showed Cuomo up by just six points.

Why such a significant spread? It's possible that the poll showing a tight race (from Quinnipiac) was simply an outlier. But even taking into account various differences between how the polls were taken, the answer most likely lies in large part in who was surveyed: the Siena poll was of registered voters overall, while the Quinnipiac poll was of likely voters. Registered New York voters overall seem to prefer Cuomo by a wide margin. But when you consider only New Yorkers who are likely to vote, you suddenly have a tight race.

And that's a big part of the Democrats' problem: Many Americans like them better, but a lot of them don't vote. Their challenge in the run-up to the midterm elections, then, is to turn apathetic voters out - to lessen the impact of the enthusiasm gap.

That's why the president held a conference call with student journalists Monday and will participate in a series of events Tuesday to encourage young people to vote. Speaking to students who gather for watch parties around the country Tuesday, "the president will stress the need for young voters in particular to be engaged in the political process and to vote in the elections this fall," according to Organizing for America.

Now, it should be noted that the Democrats' most significant policies are not particularly popular, chief among them the health care bill and stimulus package. But what often goes unreported is that some of this anger comes not from the right but the left: An Associated Press poll out over the weekend found that "Americans who think the [health care] law should have done more outnumber those who think the government should stay out of health care by 2-to-1."

Democrats are making the case that the health care bill made a positive difference, even if it wasn't quite what many on the left wanted - they never got that public option, for starters. Their problem is that such a message isn't exactly a rallying cry. Democrats would likely have had an easier time getting the young and first-time voters who showed up to back them in 2008 to the polls this year had they pushed more liberal legislation - though they also could have further energized an already worked-up right.

Liberals say it would have been worth it - that pushing harder on health care, gay rights, economic stimulus and other issues would have energized the base and wouldn't have made a difference in terms of goosing GOP turnout because Republicans are already planning to vote. Many on the left who do plan to vote say that they are motivated now not by their own party by the opposition: "What's motivating me is the tea baggers," Daily Kos founder Markos Moulitsas said in July.

Mainstream Democrats, however, are making the case that their supporters shouldn't just be motivated by their anger at the other side. In its release on Tuesday's event encouraging young people to vote, OFA lauded the administration's "major strides on behalf of young people nationwide," among them "streamlining the student loan system and eliminating massive subsidies to lenders, increasing the size of Pell Grants, reforming health care to permit students to stay on their parents' insurance plans until the age of 26, and strengthening credit card regulations that protect college students."

Thus far, however, that message doesn't seem to be generating much enthusiasm among those on the left. And that makes Democrats' popularity compared to the GOP relatively cold comfort.