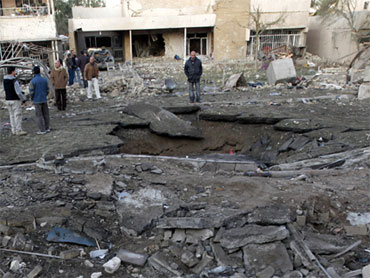 Oscar, Emmy and Golden Globe award-winning actress Christine Lahti's newest role is in the CBS made-for-television movie, "The Book of Ruth," in which she plays Maylene, an unhappy and controlling mother.

The movie is based on Jane Hamilton's book by the same name. Lahti tells The Early Show co-anchor Hannah Storm, "It's about a very tight dysfunctional relationship between a mother and her daughter in a small rural town."

Maylene's son is extremely bright and manages to escapes his hometown by getting a scholarship to MIT. But her daughter quickly follows in Maylene's footsteps by working at the local drycleaner and marrying a local boy who is nice but lazy.

About Maylene's relationship with her daughter, Lahti says, "There so many moments where they nearly connect and nearly get to express love for each other, but they're so inhibited and they're so sort of blocked by their dysfunction that they just can't do it. And it is a real journey for these two characters. Ultimately, it's very hopeful at the end, as you know, where the daughter can break free from this relationship and she ends the cycle of dysfunction that is handed down from generation to generation."

Because of Maylene's profound disappointment in her own life, and that of her daughter's, she constantly insults and picks on Ruth and her husband, Ruby, who live with Maylene. The result is tragic.

One of the things Lahti says she took away from this novel is that we parent the way we were parented.

How to Avoid Moving Scams

She says, "Sometimes, you catch yourself saying, 'Oh, my gosh, I just said the same thing my mom told me.' Sometimes that's good. Sometimes you have to be careful and don't want to pass along any dysfunction to your children. You want to try to love them without judgment and unconditionally. In Maylene's case, she didn't have a clue how to do that. She was unloved, neglected. There are no parenting classes or therapy for people like Maylene."

"The Book of Ruth" is Lahti's third Oprah book-based movie for CBS. She also starred in "The Pilot's Wife" and "Open House."

"Lately in my career, the roles that scare me are the ones I want to do," Lahti points out. "Maylene scared the hell out of me. It's a challenge and I want to stretch. I've done so much work that at this point if I don't stretch and scare myself, then it's not that exciting. This was so exciting."

Asked what attracted her to that role, Lahti says, "I think we all make mistakes as parents. What was so exciting about Maylene for me is she is a classic sort of villain. But I never would play her a villain and judge her. You have to judge her from her point of view. That was exciting, to really have to go beneath the surface and see what makes a person mean, what makes a person be abusive? She was so lonely and so sad and so insecure herself that she just had a big, huge hole in her to try to desperately fill up, which she couldn't do."

Lately, she points out, there are more roles for mature women in television, something she wishes was also true in film. She says. "Diane Keaton got the one this year, and she did such an amazing job. You would think with the success of that movie, which was called 'Something's Gotta Give,' that there would be a whole rush of these movies being made. Maybe that will come.

"Meanwhile, on television, there have been wonderfully complex parts, thank God, because I've been fortunate enough to play a lot of them. I'm so grateful because this kind of drama you would have seen years ago on the big screen. You know, it's very character driven. It's got a great story. There's a lot of sort of dark comedy in it. I'm grateful to television for doing it."