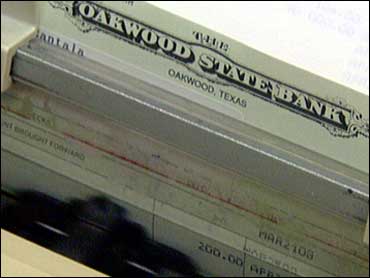 The town of Oakwood in east Texas used to be known for growing cotton. Now, CBS News correspondent Steve Hartman reports, it's mostly known as a town that used to be. Every business from its heyday is gone, with one very small exception: The Oakwood State Bank, the smallest bank in America.

Its 84-year-old president, R.R. Wiley, says the bank has just 600 checking accounts, no savings accounts and no CDs … and no compact disks, either.

The place is pretty much frozen in 1973.

"There's not many like this around," quipped Lela Coates, an employee at the bank.

"I'm posting them and she's filing them," Coates explained. "I don't post too good."

"Why don't you get updated machines?" Hartman asked.

"And that's all we want to know about them," Wiley quipped. "We're an antique bank. We're run by antiques."

But it's a modern world, so how does The Oakwood Bank keep running on typewritten deposit slips?

"He's the last holdout; there's no doubt about it," says George Solomen, who sells data processing systems to banks.

Solomen says he's been trying to get Wiley to close the deal for 20 years.

And for 20 years, Wiley has given the same response:

And no computer has ever won the hearts of its customers.

"They take care of me," said one customer.

And CBS News heard that repeatedly from other customers. Even the hard-sell salesman seemed to soften a bit.

"Why is there a part of me that's rooting for him - that he doesn't have to get a computer?" Hartman asked Solomen.

"Because we don't want to go forward," Solomen said. "I'm rooting for him too."

Unfortunately, you can't live forever in the past. Mostly because eventually they stop making parts for it.

Such is the case with Lela's old electronic posting machine; when it goes, they may have no choice but to computerize.

Which is why, every night she carefully tucks it in and prays that it'll fire up again, that when tomorrow comes to Texas, it can still be yesterday in Oakwood.