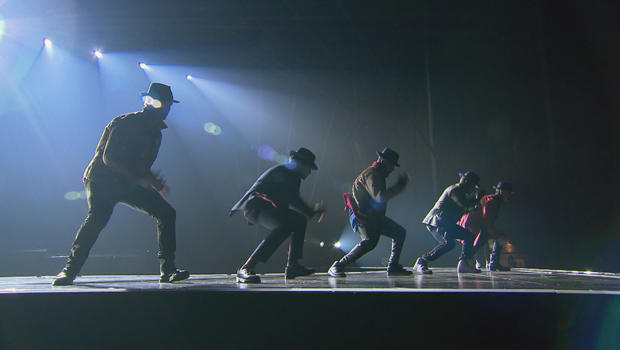 If you were alive in the 1990s you probably can sing along to the Backstreet Boys. Back in the day, they were a phenomenon; hysterical fans fainted, in a frenzy some compared to Beatlemania.

And with more than 130 million records sold worldwide, they remain the bestselling boy band of all time.

Their new album, "DNA," has brought new life to the band, and their first chart-topper in more than a decade.

Correspondent Tracy Smith asked them, "When 'Don't Go Breaking My Heart' was released, it shot to #1 on iTunes. What was your reaction?"

To watch the music video for the Backstreet Boys' "Don't Go Breaking My Heart," from their album "DNA," click on the video player below:

And fans who grew up screaming and dreaming of a close encounter with the Backstreet Boys are getting a second chance. At the Grammy Museum in Los Angeles, where the guys helped open a Backstreet Boys interactive exhibit, there was pandemonium

On display: treasures from their youth, like the costumes from the music video for "Quit Playing Games (With My Heart)," their first hit in America.

To watch the music video for "Quit Playing Games (With My Heart)," click on the video player below:

"I remember these outfits from the video but they were a lot wetter," said Smith.

"Howie's was off pretty much the entire time," McLean added.

Businessman Lou Pearlman brought them together in 1993. Richardson, the oldest, was 21. Carter was just 13 – a boy band that became a sometimes dysfunctional family.

At 13 Carter's parents signed over guardianship of their son to Brian Littrell: "So, he was actually raising me on the road at, like, thirteen, fourteen years old."

"We love hard, but we also fight hard," Richardson said. "I mean, there's been fistfights in this group."

"Who's fought who?" Smith asked.

"Because he burned my comic!" Carter explained.

"I punched you a lot, but you didn't punch back. Nick holds the record for the most fights. Yeah!"

That chemistry worked. In 1999 their album "Millennium" sold more than a million copies the first week alone. And as the boys cranked out hit after hit, their rather devoted fan base expanded across the globe.

To watch the music video for their hit "I Want It That Way," from "Millennium," click on the video player below:

But all the while Lou Pearlman, whom they affectionately called "Big Poppa," was cheating them, raking in millions while the boys were still struggling to pay bills. When they found out, they sued, then settled.

Brian Littrell said, "You are looking at five individuals that paid $5 million apiece to rid him of their lives."

"So, he owed you money, and you guys paid him, to get rid of him?" asked Smith

Richardson said, "We all loved him and admired him and looked up to him as a businessman, but then when the curtain was pulled back and it was revealed that he was ripping us off and taking advantage of us, it broke our hearts, it hurt."

The drama took its toll. First McLean, then Carter battled drug and alcohol abuse, and in 2006, Richardson left the band. But the band refused to leave him.

"Every reality TV program came to us and said, 'Oh, we can find another Kevin if you'll sign on,'" said Littrell. "We wouldn't do it. it's like building a house. and we built this career for 26 years with a part of Kevin's blood, sweat and tears, and we weren't gonna replace him."

McLean added, "We will never turn our backs on each other."

And their bond was tested again. In the documentary "Show 'Em What You're Made Of," Littrell, who sang lead on so many hits, revealed he suffers from muscle tension dysphonia – simply put, under stress he loses his voice.

Of his voice, Littrell said, "It's a work in progress, as you know, that I can talk to you right now. Probably four or five years ago I was not able to talk. So, if you can't talk, you can't really sing."

Smith asked, "What did you do?"

"Therapy, a lot of soul-searching."

Through it all, the band stayed intact, and in 2017 launched a Las Vegas residency, which became the fastest-selling show in Vegas history. Embracing their resurgence, the group began releasing new music.

To watch the music video for "Chances," from their album "DNA," click on the video player below:

And they decided to take a chance on a new world tour, their biggest in 18 years. So, they retreated, far from the lights of the Vegas strip, to a rehearsal studio in the historic town of Lititz, Pennsylvania.

Howie Dorough said, "This tour, to me, is almost like the second coming of the Backstreet Boys."

Littrell described what was on his mind as "Nerves, fears, anticipation."

Loneliness is no longer an issue; the boys are all married men, with eight children between them.

Tears flowed as Brian watched his 16-year-old son, Baylee, open their show for the first time in Washington, D.C., while backstage the dressing room is now a family room, huddling together with a little prayer before the show.

Two-and-a-half decades after it all began, the Backstreet Boys are on a sold-out tour, with a new hit album, "DNA."

You can stream the Backstreet Boys album "DNA" by clicking on the embed below (Free Spotify registration required to hear the tracks in full):

McLean said, "We never changed; we've always stayed true to who we are. For us to stay on this steady path for the last 26 years and never falter, it actually worked. It paid off."

And that kind of staying power has got to make the guys feel good, maybe even "larger than life."