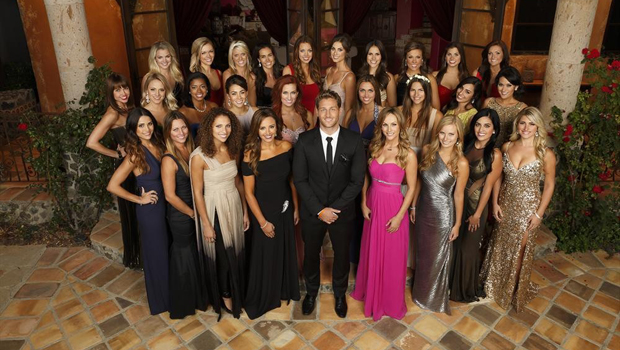 It may be cold in much of the country, but the new "Bachelor" is heating things up for "Juan-uary."

Juan Pablo Galvais made his debut Monday on the two-hour season premiere of "The Bachelor," with 27 women vying for the sexy single dad's affections.

"It's very important for me to find true love. It's what I'm missing right now," he said in a voiceover. "I'm the first 'el Bachelor Latino.' I speak the language of love."

After seeking the advice of former "Bachelor" Sean Lowe ("Make sure if you kiss someone, the other girls don't see," he warned), he was off to meet the ladies competing for his heart.

The former pro soccer player greeted each woman as they stepped out of a limo. A few seemed to stand out -- including a single mom named Renee, a pediatric nurse named Nikki, a "science educator" named Chelsie, a "free spirit" named Lucy who showed up barefoot with flowers in her hair and Andi, an assistant district attorney from Atlanta. Another of the hopefuls, Claire, decided to wear a fake baby bump when she met Juan Pablo for the first time -- which might seem a little crazy, but he called her "very cute."

Others stood out in not-so-good ways. Lauren H., a "mineral coordinator," earned the dubious honor of having the first breakdown, crying over a broken engagement that she swears she's over but is very clearly not. When she finally got some alone time with Juan Pablo, she spent most of it talking about her ex.

Another was Amy J., a massage therapist who took him to a massage table set up outside the mansion to rub him down with massage oils -- while he was still wearing his suit. Awkward.

Juan Pablo gave the night's coveted first-impression rose to Sharleen, an opera singer who didn't even seem to really want to be there. (Her response when he offered her the rose: "Seriously?").

"I guess I thought that I would feel more of this, like, insta-chemistry than I did," she confessed when he wasn't around. "If I'm totally honest, it just seems a little forced."

Nothing else crazy happens until the rose ceremony, when a contestant named Kylie thought Juan Pablo called her name, but he'd said Kat. "Can you take both of us?" she asked. No, Kylie, he can't.

In the end, the women who didn’t get roses were Kylie, Lauren H., Amy J., Christine, Ashley, Valerie, Lacy, Maggie, and Alexis.

Tell us: What did you think of "The Bachelor" premiere?