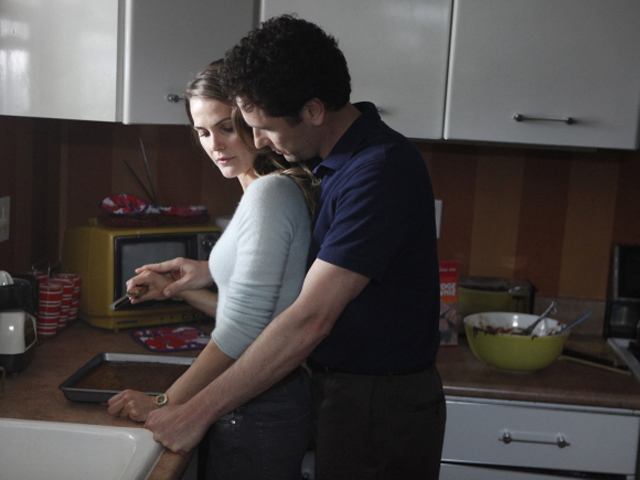 FX is set to debut the first episode of its new Cold War-era spy drama, "The Americans," on Wednesday night at 10 p.m. ET.

Keri Russell and Matthew Rhys star in the series as typical suburban parents living near Washington, D.C., towards the start of the Reagan administration. The catch? This seemingly-average couple happen to be a set of Russian spies.

Reviews for the first several episodes of "The Americans" are in and have been, for the most part, fairly flattering towards the series. "The Americans" has been met with praise for balancing tense moments of espionage with the spy couple's everyday marital issues. Further acclaim has been given for the series' depiction of the early 1980s, featuring appropriate clothing, cars, and music of the time. "The Americans" has also garnered favorable comparisons to the hit Emmy-winning Showtime series "Homeland," given its somewhat-similar subject matter.

Here's what some critics are saying:

Tim Goodman, The Hollywood Reporter: "I enjoyed the first two episodes of FX's spy series 'The Americans' as much as I did the entirety of season two of 'Homeland'...There is something about 'Americans', which also explores spies and terrorism on U.S. soil, that invests me with the same type of hope I had at the beginning of Showtime's gem."

Todd VanDerWerff, The A.V. Club: "What makes 'The Americans' work so very well -- and it's the best drama pilot of this TV season -- is the fact that's it's at once a very good spy series and a very good series about a marriage, and the two things somehow bounce off of each other in a way that makes the series much more than just a sum of its parts."

Roberty Lloyd, Los Angeles Times: "There are enough interesting ideas inherent in the material to warrant giving 'The Americans' a chance, and interesting enough ideas that one wishes a little more attention were being paid to them, and a little less to the usual spy-jinks."

Alessandra Stanley, The New York Times: "'The Americans'...is also a remarkable accomplishment: It's a subtle, complex portrait of a relationship etched into an engaging espionage thriller."

James Poniewozik, Time: "It's a promising personal and political thriller that uses its '80s setting for much more than easy nostalgia."

David Hinckley, New York Daily News: "It's a premise that requires as much clever dramatic footwork as you might expect, and creator Joe Weisberg, a former CIA agent, handles the challenge."

Maureen Ryan, The Huffington Post: "The entire premise hinges on a big coincidence, but viewers will forget about that if 'The Americans' gives them ample reason to do so, and it's well on its way to doing that."

Tell us: Do you plan on watching "The Americans"?