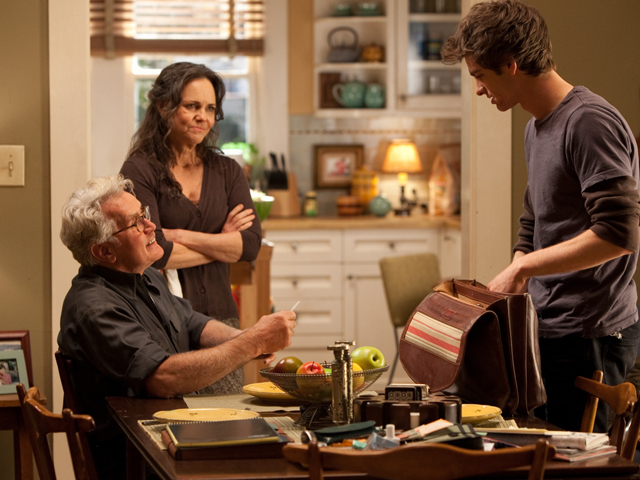 And it looks as if there's more to come. Producers have teased that a trilogy is in the works.

A post on the film's official Facebook page this week revealed: "It's finally here! The 'Amazing Spider-Man' is the first installment in a movie trilogy that will explore how our fave hero's journey was shaped by the disappearance of his parents."

Take note of the words: "in a movie trilogy."

The latest reboot raked in $35 million domestically in its first day, breaking the Tuesday record of $27.9 million, previously set by "Transformers" in 2007.

The opening-day results suggest that fans are still clamoring for the superhero brand, which set box-office records from 2002 to 2007 with the three films directed by Sam Raimi and starring Tobey Maguire.

And by the sound of it, producers Matt Tolmach and Avi Arad will cash in on the latest "Spider-Man" craze with two more films.

In a recent interview with SuperHeroHype.com, Tolmach said that he expects to produce at least two follow-ups.

"One of the things that Matt and I are working on is the expansion of the universe. The Spider-Man universe, as you know, has very interesting characters," Tolmach said.

"The moment you have Gwen in the movie, you know the story will continue, and not only that but one of the things we were able to really tie into our villain is also the relationship with Gwen, which makes the whole thing so real and complex, how they feel about this guy who has now lost it and Peter now has the responsibility to stop him and save the city," Arad told the site this week.

Tell us: Did you see "The Amazing Spider-Man" yet? What did you think?