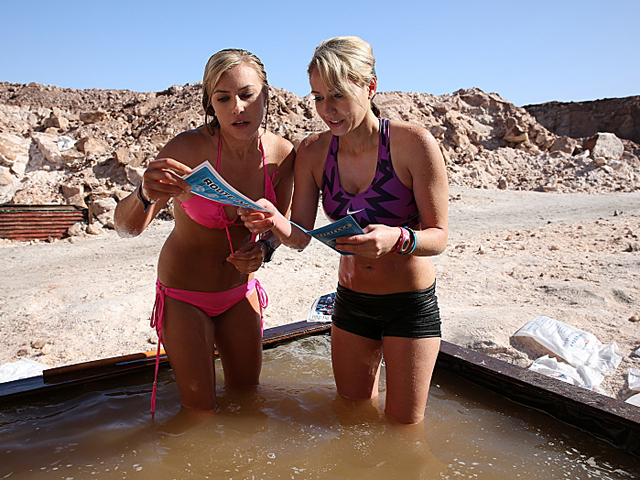 An attempt at strategy backfired spectacularly on Sunday's "The Amazing Race," and a team simply not fit to compete was sent packing.

Before we get to that, let's pick up where this leg of the race began -- very early in the morning in Iquique, Chile. Teams are told to head to the Museo Corbeta Esmeralda, where the "officer of the day" will provide their next clue. Those officers' shifts are not 24-hour ones, so all the teams have to wait four hours until opening time.

Everyone had to figure out the famous phrase said by Chilean national hero Arturo Prat ("Charge the ship, men!"), and say it to the officer in Spanish. That sent teams to the Irlanda Salt Mines for a Detour -- Mining or Brining. In Mining, teams had to smash open boulders of salt to find their next clue. In Brining, teams had to carry heavy bags of salt to a pool, and then make the pool salty enough that they could float in it (and read the day's newspaper while doing so). Most teams chose the second task, which required less brute strength and gave teams a reason to run around in swimsuits.

Once that task was completed (bearded buddies Brandon and Adam were in the lead at this point), teams had to head to the bus station and board a bus to Chile's capital, Santiago. The first five teams get on the earlier bus for the 1,000-mile journey, while the next four get on a later one that makes more stops. It's here that Rowan and Shane, a.k.a. the "Queens of Bingo" make a huge mistake -- either because they got confused or spoke poor Spanish (or maybe both), they thought there was another bus that left two hours later than bus No. 2 but still got to Santiago earlier. Thinking they've got it made, they smile and wave as the other four teams depart, but then realize their chosen bus arrives hours later. They talk themselves onto a slightly earlier bus and end up arriving about an hour later than everyone else.

"This is how the race should be. We're running it. We're not sitting back," Rowan explained after their plan backfired.

Once in Santiago, it was time for one member of each team to shine shoes for their Roadblock. After helping a customer, each competitor had to pack up the shoe shiner's entire kit and transport it to a central depot area.

It's a race for first between NFLers Chester and Ephraim and cousins Leo and Jamal. The cousins arrive at the Cascada de las Animas nature preserve first but can't be checked in because they didn't pay their cab driver the correct fair. This dissolves the two into a storm of bickering and finger-pointing. While they settle up, the NFL guys arrive at the Pit Stop and get the official first-place finish, winning a trip to Turks and Caicos.

Leo and Jamal take second and Brandon and Adam take third, followed by married ER doctors Nicole and Travis, dating couple Jason and Amy, buddies Tim and Danny, ice crew girls Ally and Ashley and exes Tim and Marie, who still hold their own Express Pass and the one they have to give to another team. They forged a tentative alliance with baseball wives Nicky and Kim earlier in the episode, but when Nicky asked Marie for the pass during the Roadblock she demurred and held onto it).

It was a race for last between Nicky and Kim and Rowan and Shane, who managed to just catch up despite the bus blunder but got confused during the Roadblock and fell behind (reading the clue and knowing certain shoe-shine stands were marked for the race would have helped), arriving 10th and becoming the second team eliminated from the race.

Tell us: Were you sad to see Rowan and Shane go?