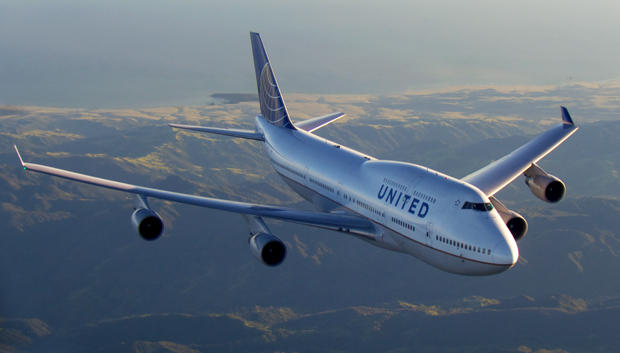 Years ago, famed British architect Norman Foster proclaimed that his favorite building of the 20th century was an PLANE -- the Boeing 747. Now, the jumbo jet he so honored is on its final approach as a passenger plane. Kris Van Cleave gives us the view from the cockpit:

"I don't know any pilot that does not want to fly a 747," said Theresa Claiborne. "If they tell you that they don't, they're lying."

There aren't many aviators who've had have a career like Claiborne. She was the first African-American woman pilot in the Air Force, and for the last 27 years, one of only a handful of black women pilots at United Airlines.

But if you ask this trailblazer the highlight? Hands down it was flying "the Queen of the Skies." "First of all, it's beautiful. I mean, if you just look at the shape of it. It doesn't look like any other airplane. That second story, that hump. Kind of reminiscent of a whale. It's just a gorgeous airplane."

Claiborne has spent more than 15,000 hours as a first officer on that plane, but none as captain.

"It would have been nice if I'd been able to slide over to the left seat. But that wasn't to be the case."

"You're sliding over there now," said Van Cleave.

"I am. In a smaller airplane."

She's finally going to make captain, but on the 757, because on Tuesday United Airlines will fly its very last passenger flight on the 747. And by year's end, not a single U.S. airline will still be flying what's arguably the greatest of all American airplanes.

"The 747 was such a big airplane that people just literally thought it wouldn't fly," said Michael Lombardi, the historian at Boeing -- the company that in 1969 revolutionized air travel when it unveiled the world's first jumbo jet.

The prototype is now on display at Seattle's Museum of Flight.

"When it first came out, it was twice the size of the next biggest airplane," Lombardi said.

Before long, airlines from around the world were lining up to buy their very own jumbo. "Your airline wasn't an airline unless you had a 747," Lombardi said.

And how did those airlines make use all that extra space? By trying to outdo each other to build the best lounge.

But after airline deregulation in the late '70s, those cocktail bars gave way to more seats.

In the years ahead, the 747 helped ferry millions of people to faraway destinations.

With that distinctive hump, that spiral staircase, it was a plane that captured the imagination. Its four engines carried the space shuttle across the country, and five U.S. presidents around the world -- a beacon of American ingenuity.

The 747's days carrying passengers are now numbered, but it's outlasted the expectations of its original engineers by almost 40 years, and counting.

Back in the Sixties, Boeing thought supersonic jets, like the Concorde, would soon be the norm … and once that happened, the company figured airlines would want to retrofit their 747s for a second life carrying freight.

Those supersonic jets never took off, but they helped make the 747 the most recognizable plane in the world.

"When they were designing the 747, they knew it was going to be a freighter -- they wanted to be able to load freight through the nose," said Lombardi. "So to do that, they moved the flight deck up on top of the fuselage. That's how the 747 got its hump."

"This iconic design came out of a need to be able to load cargo?" asked Van Cleave.

"Right. The original design goals of making this a great freighter plane, that's what's keeping this airplane in service. And will keep this airplane around for decades to come."

When Paul Chamberlin joined Boeing in 1990, the company was cranking out six 747s a month at its production facility north of Seattle. Now Boeing delivers just one every two months.

"I'm still coming to work every day and still building these," he said. "There's a bit of me on every one of those airplanes. So it's kind of an odd feeling to see that phasing out. It's kind of traumatic, in a way."

But he hopes the plane's life as a freighter will keep him building 747s as long as he can.

"Every time it takes off, I get goose bumps to think that something this big, something this awesome, just lifted off," Chamberlin said. "It's in the air! It's pretty phenomenal!"

Even people who don't know airplanes know a 747 when they see it. And that's what United's Theresa Claiborne will miss most.

"Everybody, they just stop and stare, 'cause it's that awesome," she said.

"They call it the 'Queen of the Skies.' Do you think that's fitting?" asked Van Cleave.

"Well, between you and me, I used to call it the king!"