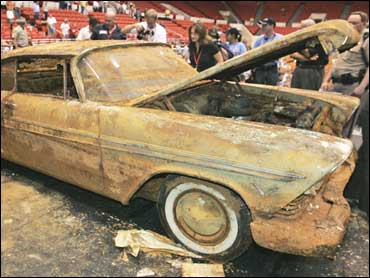 A concrete vault encasing a 1957 Plymouth Belvedere buried a half-century ago may have been built to withstand a nuclear attack but it couldn't beat back the natural onslaught of moisture, organizers of the car's unveiling found Friday.

After the curtain went up at the ceremony, complete with a couple drum rolls, a multilayered protective wrapping caked with red mud was removed, revealing the vintage vehicle covered in rust.

There were a few bright spots: shiny chrome was still visible around the doors and front fender, and workers were able to put air in the tires.

But the reveal in front of thousands of people at the Tulsa Convention Center affirmed what many feared: the past 50 years had not been the kindest to Miss Belvedere.

"I'll tell you what, she's a mess," said legendary hot rod builder Boyd Coddington, who was unable to start the thing up as initially planned. "Look at her."

Event organizer Sharon King Davis, a fourth generation Tulsan whose grandfather helped bury the Plymouth, joked that the car needed a little Oil of Olay to help it out.

In the trunk, organizers meticulously pulled out some of the objects buried with the two-door hardtop to celebrate Oklahoma's 50 years of statehood in 1957. A 5-gallon can of gasoline — sold at 24 cents a gallon in those days — and rusted cans of Schlitz beer were recovered.

The contents of a "typical" woman's handbag, containing 14 bobby pins, a bottle of tranquilizers and a lipstick, among other items, was supposed to be in the glove box, but all that was found looked like a lump of rotted leather.

Workers also searched for a spool of microfilm that recorded the entries of a contest to determine who would win the car: the person who guessed the closest of what Tulsa's population would be in 2007 — 382,457 — would win.

That person, or his or her heirs, will get the car by June 22 and a $100 savings account, worth about $1,200 today with interest. So far, all they found were guesses of the population written on postcards.

The elements could not penetrate a separate time capsule buried with the car. Its top was sawed off Friday and organizers removed and unfolded an unfaded American flag, sending up a rousing applause through the crowd.

Other historical documents, aerial maps of the city and postcards were in good condition.

Hours earlier, thousands of curious onlookers watched as the car was placed on a flatbed truck about noon CDT and driven to the Convention Center for the evening event. Some had arrived downtown before 6 a.m. and endured torrential rain just to get a glimpse of the car.

By the time of the ceremony, people were standing on rooftops and looking out office buildings as news helicopters buzzed overhead.

"Ladies and gentlemen, I present to you Miss Belvedere," said King Davis, before the crane delicately placed the car onto the flatbed.

Only the car's trademark fins were exposed as it came out of the ground, and it was unclear if they were caked with rust or mud.

The suspense was what Pittsburgh car enthusiast Dave Stragand came for.

Like Stragand, folks who gathered at the site — many days earlier — didn't seem too concerned with how the car would look.

"We don't care what condition it's in," said Denver retiree Bob Petri, a car nut who said he was "born with a wrench" in his hand. "It's just the whole idea somebody thought of it in 1957 and here we are living it."

Sanford Siegel was 11 when he came down to the courthouse with his dad to watch the Belvedere buried in 1957. Fifty years later, Siegel, who now lives in Sugarland, Texas, brought his two sons to watch the unearthing.

"It brings back 50 years ago; it's a lot of memories," he said, tears coming to his eyes.

"I don't care what it is," he said, almost defiantly.

For Roland Binette of Victoriaville, Quebec, the ceremony was partly about the novelty factor.

"It's an American idea," he said. "We don't do things like this at home. Maybe we can't afford to."