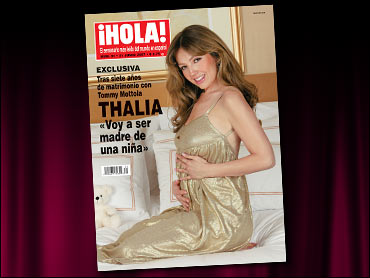 For years, Mexican superstar Thalia has put up with rumor after rumor that she was pregnant.

The rumors always turned out not be true, but now the wife of record mogul Tommy Mottola has confirmed that she's expecting her first child.

The 35-year-old singer and actress is known for her curvy figure and a waist so tiny that she has had to fend off another silly rumor: that she once had a rib removed.

But now the tiny waist has given way to a growing tummy, which she proudly shows off on the cover of the June 21 issue of ¡Hola! magazine.

"I feel peace; I feel like a whole, feminine, voluptuous woman," she tells the magazine. "I feel it's the best body I've ever had. I enjoy every new curve I discover every day. It's amazing."

Mottola, 57, has two children from his first marriage to Lisa Clark. He divorced her in 1990 and was married to singer Mariah Carey from 1993 until their divorce in 1998.

Thalia and Mottola were married in a lavish ceremony at St. Patrick's Cathedral in New York in November 2000 that reportedly cost $3 million.