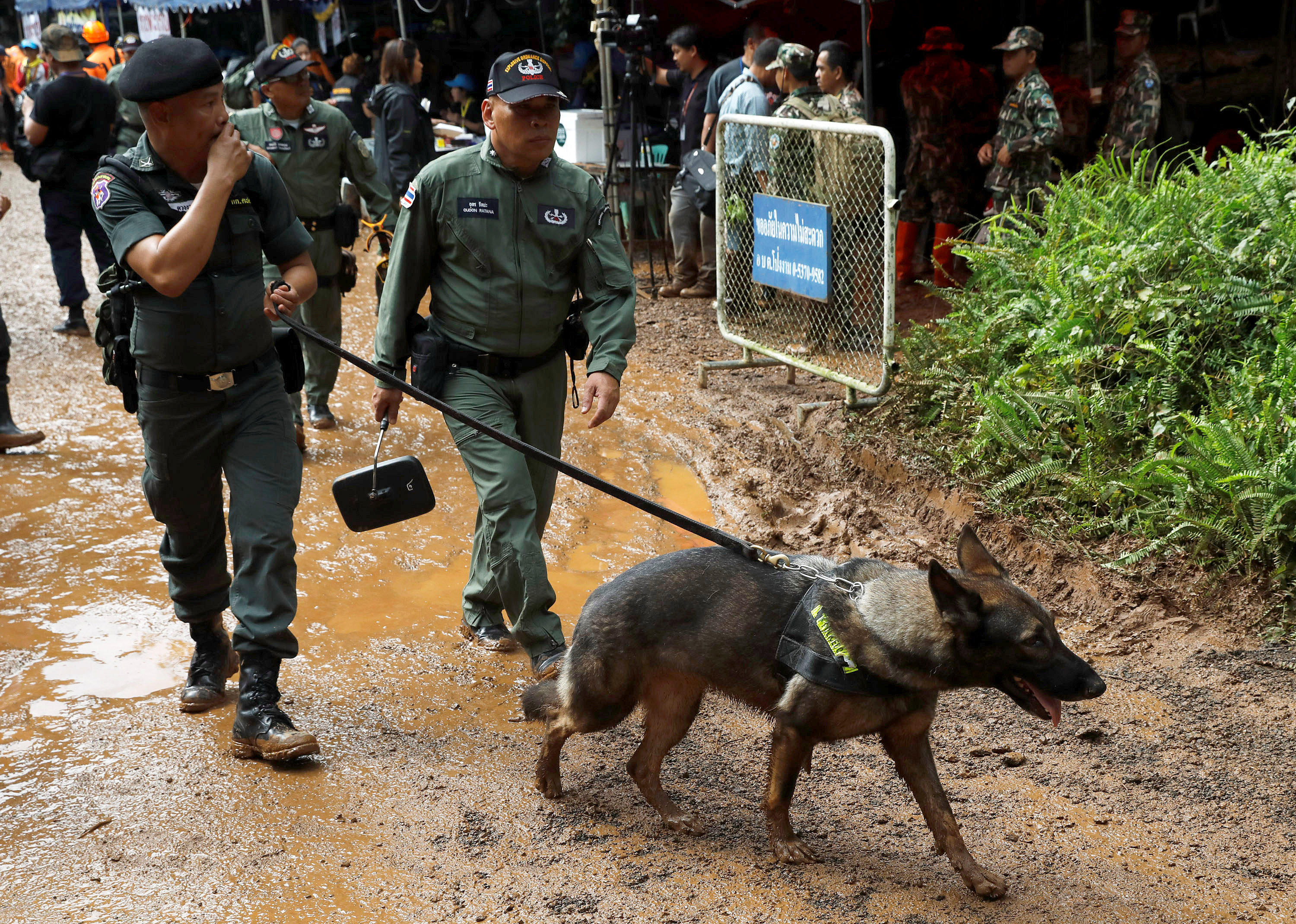 MAE SAI, Thailand -- Thailand's prime minister on Friday visited a flooded cave complex where rescuers have been searching for 12 boys and their soccer coach missing for six days and urged their relatives not to give up hope.

"There has to be faith. Faith makes everything a success," Prime Minister Prayuth Chan-ocha, the country's military ruler, told families waiting outside the cave. "Faith in the actions of officials. Faith in our children who are strong and vigorous. Everything will go back to normal."

The boys, aged 11 to 16, and their coach entered the sprawling Tham Luang Nang Non cave after a soccer game on Saturday afternoon, but near-constant rains since then have thwarted the search for them. Authorities have nevertheless expressed hope the group has found a dry place within the cave to wait, and that they are healthy enough to stay alive.

Muddy floodwaters reached near the entrance of the cave Friday despite days of efforts to drain the water. Howard Johnson, from CBS News partner BBC News, reports that some of the team of 30 U.S. military personnel who joined rescue efforts earlier this week was looking for shafts into the cave down which to rappel on Friday. Their efforts are part of a three-pronged approach to the operation, which also includes pumping water out of the cave and exploring the caverns, Johnson says.

Other crews were working to drill wells in hopes of draining the water, which could allow divers to advance into flooded passages. Despite the hard work, rescuers' progress has been fitful at best, with no guarantee the water will soon recede with months left in Thailand's rainy season.

Authorities have warned that the rising water is complicating efforts to supply electricity to the cave, raising the risk of an accident. There appeared to be a mishap Friday when workers ran out of the cave saying rescuers had been injured and to shut off the power. Several ambulances then rushed people from the site.

At least one police official initially said men had been electrocuted, but medical workers at the site along with Chiang Rai provincial Gov. Narongsak Osatanakorn said that wasn't the case. Instead, they said a man had fainted while working on a water pump, prompting the scare, and another man had a stomach ailment.

Narongsak thanked people in Thailand and abroad for their support, including a U.S. military rescue team and U.K. cave divers.

"We will keep our effort up no matter how tired we are," he said.

He said Thai navy SEAL divers had been able to work underwater Thursday but would not elaborate on their progress. The divers have oxygen tanks but still must have enough space between the water and the cave ceiling to surface for air and to ensure their safety in the muddy waters that fill rocky passages, some so tight the divers must bend their bodies to advance through them.

Above ground, four shafts have been located that might allow access to the cave and rescuers were continuing to explore them on Friday, Narongsak said. He said one shaft had showed promise, leading to a chamber below, though it wasn't clear if it connected to the main cave.

Officials said they were also dropping "care packages" into the shafts in case they reach the cave. The packages contain food, beverages, a phone, a flashlight, candles and a lighter. They also include a map of the cave.

The team trying to find a way to drain the water dug until 1 a.m. to a depth of 30 meters (98 feet) but did not find any wells, said Ekchawin Longpinit from the Thai Underground Water Department. About a dozen workers were drilling at the same spot Friday morning. "We will continue to drill today, and more drill equipment is being sent" to explore more spots to drill, Ekchawin said.

Editor's note: An earlier version of this story reported that rescue workers had been electrocuted. This has been corrected to reflect new information from officials.