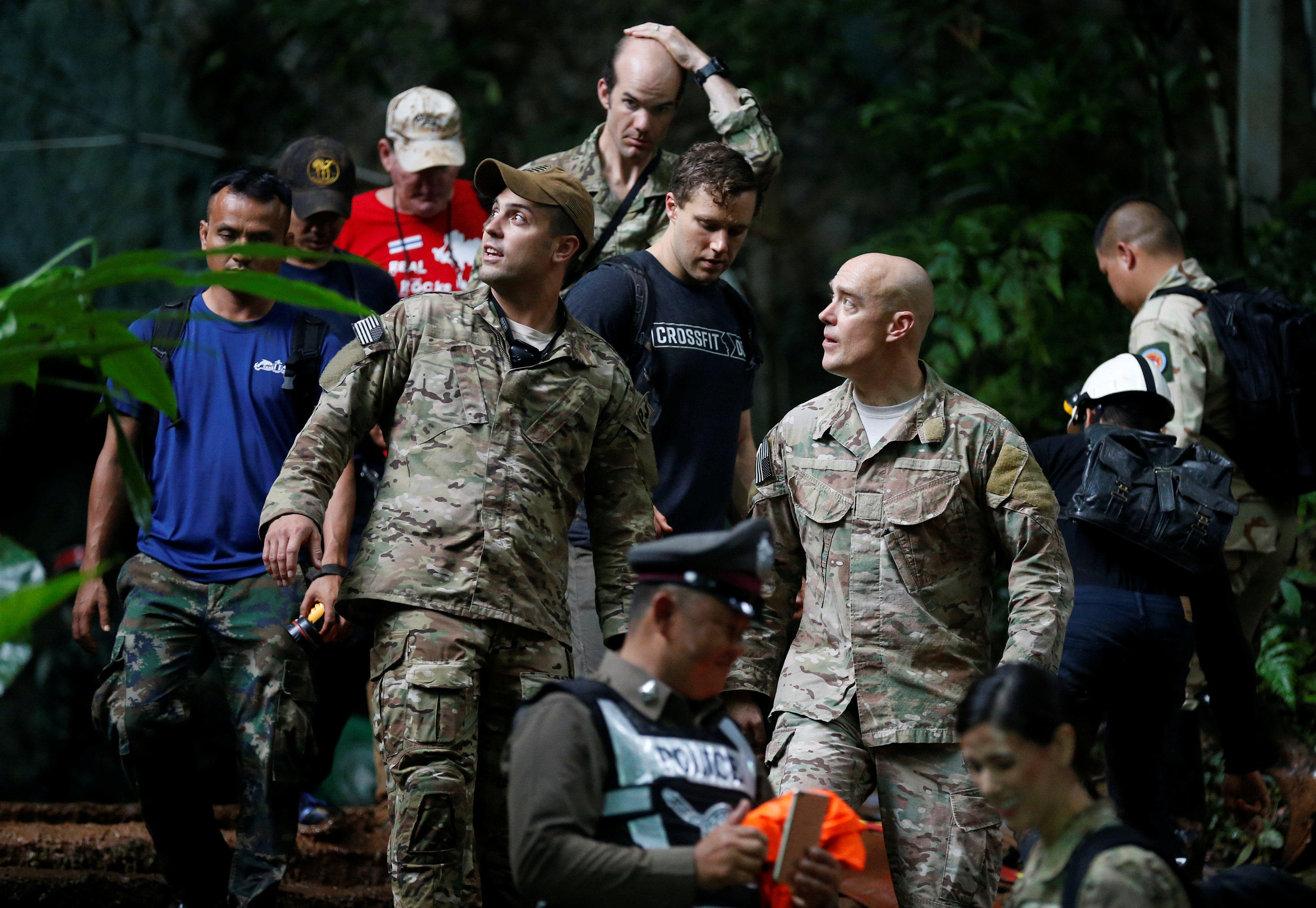 A team of U.S. military personnel and British divers joined rescue efforts at a flooded cave in northern Thailand where 12 children and their soccer coach have been trapped for five days as heavy overnight rains hampered the search.

Flood waters seeped into a second chamber of the Tham Luang cave and forced some of the rescue divers to turn back, according to officials.

The children, aged between 11 and 16, went into the cave Saturday and were trapped when heavy rains clogged the main entrance.

Around 1,000 Navy SEAL divers, police, soldiers, border guards and officials have been mobilised for the around-the-clock rescue in a remote and mountainous part of Chiang Rai province near the Laos and Myanmar borders.

A team of American military personnel from the U.S. Pacific Command, including pararescue and survival specialists, arrived at the site overnight to help rescue operations, according to embassy spokeswoman Jillian Bonnardeaux.

"Operators are trained in personnel recovery tactics and techniques and procedures," she told AFP.

"Essentially what they're looking at is assessing with the Thai authorities the potential courses of action and complementing the efforts underway."

Three British cave diving experts made a second attempt at entering the cave through chimneys Thursday after they tried to go in through the main entrance on the day before but were turned around by rushing flood waters.

At nearly six miles, Tham Luang cave is one of the longest in Thailand and has the reputation of being one of the toughest, even among experienced divers.

It frequently floods during Thailand's monsoon season between July and November, rendering some of its narrow passages difficult to pass through.

There are several air pockets within the complex and the kids are believed to be in a large chamber in the middle of the cave.

But fast-running and murky flood waters have prevented rescue divers from reaching them and heavy rains continue to seep into the cave through narrow openings on the sides and through the main entrance.

"The water is like cafe latte, you can't see anything, and there's a very strong flow which doesn't make it easy," Ben Reymenants, owner of Blue Label Diving in Thailand, told AFP from Chiang Rai where he was assisting with the search.

High-pressure water pumps shipped in from Bangkok were set up but water levels continued to rise Thursday.

Officials said they planned to drill a hole into the cave on Friday and dispatched drones to find an ideal site for the hole.

"It's difficult to drill vertically, if you go up the mountain and drill there are high risks (of collapse) so we might drill from the the side to improve our chances of success," Suttisak Soralump, a geotechnical expert from Kasetsart University told AFP.

Border guards scoured the site for new openings into the cave and the boys' families brought clothing belonging to the kids to help sniffer dogs find the team.

Exhausted relatives have been camped out near the cave's entrance for days desperately awaiting news on the missing team and their 25-year-old coach.

"I'm sad. I want (my son) to be safe, we've heard nothing from officials yet," Thinnakorn, the father of a 12-year-old in the cave, told AFP.

The Tham Luang cave is a popular draw for local visitors during the dry season, though a sign at the entrance warns tourists not to enter during rainy months.

Officials said the soccer team and their coach Ekkapol Janthawong have been in the cave before and know the site well.

Photos on Ekkapol's Facebook page showed him with some young soccer players in the cave in 2016.

The harrowing search has captivated Thailand, where local media is blanketed with coverage of the boys.

"He wants to offer moral support to parents of the missing boys and the coach and all the officials working there," Sunsern Kaewkumnerd said.

A forecaster in Chiang Mai said rains were expected to ease Thursday afternoon and that visibility could improve as the fog lifts.