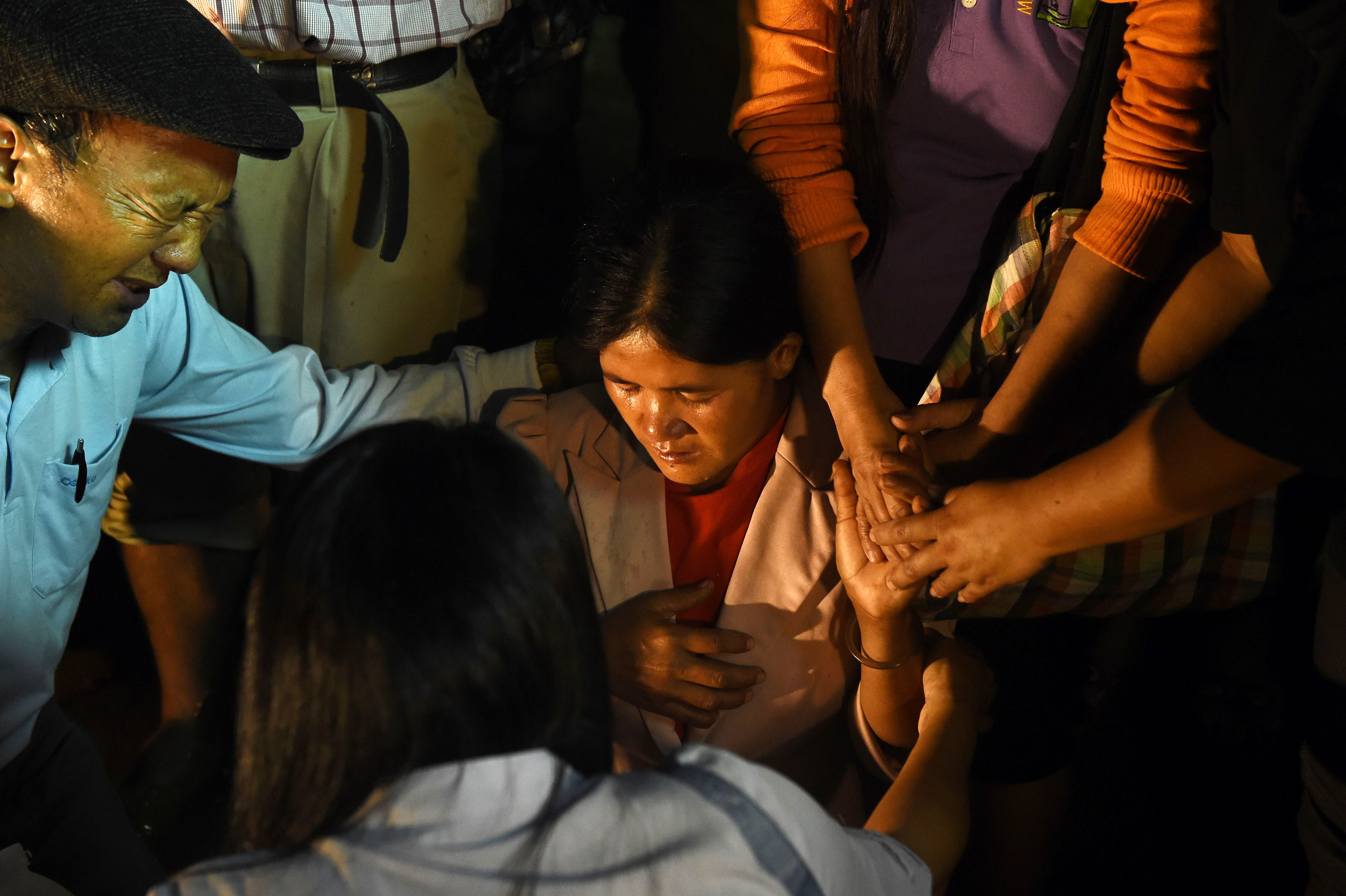 MAE SAI, Thailand -- Twelve boys and their soccer coach have been missing inside a flooded cave in northern Thailand for three days. Efforts to rescue them hinge on pumping out water so that navy divers have room to operate, the first high-level Thai official to visit the site said Tuesday.

Interior Minister Anupong Paojinda told reporters that navy SEAL divers leading the search are seriously handicapped by muddy water that has filled some chambers of the large cave to the ceilings.

The boys, aged 11-16, have been missing since their coach took them to the Tham Luang Nang Non cave complex on Saturday after a practice match. The search had to be suspended again because of high water.

Paojinda said the divers can proceed only when enough water is pumped out so there is space between the water and the ceiling to make it safer to work. The divers will also soon start using special oxygen tanks that provide longer diving times, he said.

A SEAL diver said the water is so murky that even with lights they cannot see where they are going underwater, so they need to be able to lift their heads above the water.

Anupong said rescuers would be working night and day in the dark cave.

"The SEAL team will be working nonstop because it's already dark here too," he said. "So night and day doesn't make a big difference. They'll just need to rotate."

Divers have been seeking a way forward through the chambers of the cave complex, but have been forced to suspend their search several times. The authorities are also seeking alternative ways in, using helicopters and search parties on foot to find possible holes in the ceilings of other parts of the cave.

A small glimmer of hope was dashed Tuesday afternoon after explorers found two fissures in the rock on the mountain in which the cave is located. After an evaluation, experts found neither could be used as a "chimney" to gain access to the cave.

Rain that fell overnight increased the difficulty of exploring inside the cave. However, the initial chambers near the cave's entrance are dry, and a power line was extended inside to provide light and ventilation and help the divers communicate with those outside.

The boys and their 25-year-old coach entered the cave in Chiang Rai province late Saturday afternoon. A mother reported that her son did not return from soccer practice that day, setting off the search.

Relatives of the missing boys and others performed a ritual Tuesday morning calling for those who are missing. They played drums and gongs and two relatives held fishing nets as symbols to fish out lost spirits from the cave. Organizer Jiratat Kodyee said the ritual was a traditional way of showing support for the boys' families.

The cave complex extends several miles and has wide chambers and narrow passageways with rocky outcrops and changes in elevation. Still, officials have said they are hopeful the boys found a safe space away from the floods.

Rising waters Monday evening frustrated efforts to search farther in the cave, and efforts were halted temporarily. During the night, rescue teams and electricians extended a power line half a mile and communication lines into the cave.

"We hope this will provide lights for work and fans for ventilation for the SEAL team," Chiang Rai Gov. Narongsak Osottanakorn said. "Also, it means we can use electric engines to pump water out of the cave as well."

Parents waited overnight in tents outside the cave entrance as rain poured. Medics sat in a tent nearby, and bicycles, backpacks and soccer cleats the boys left behind remained at the entrance.

At a prayer session Monday evening, some of the boys' relatives walked inside the cave entrance, where their cries echoed off the walls. "My son, come on out! I am waiting for you here!" one woman cried. Another kneeled down near the bicycles and prayed, asking "Where is my child?"

Authorities have said footprints and handprints were found inside the cave complex, and that tourists trapped there by past floods have been rescued after the waters receded.

Getting farther into the cave has required lots of oxygen and special diving skills, which would also complicate rescue efforts once the boys are found, officials said.

The cave, cut into a mountainside near the border with Myanmar, can flood severely during the rainy season, which runs from June to October, and there are warnings against exploring then.