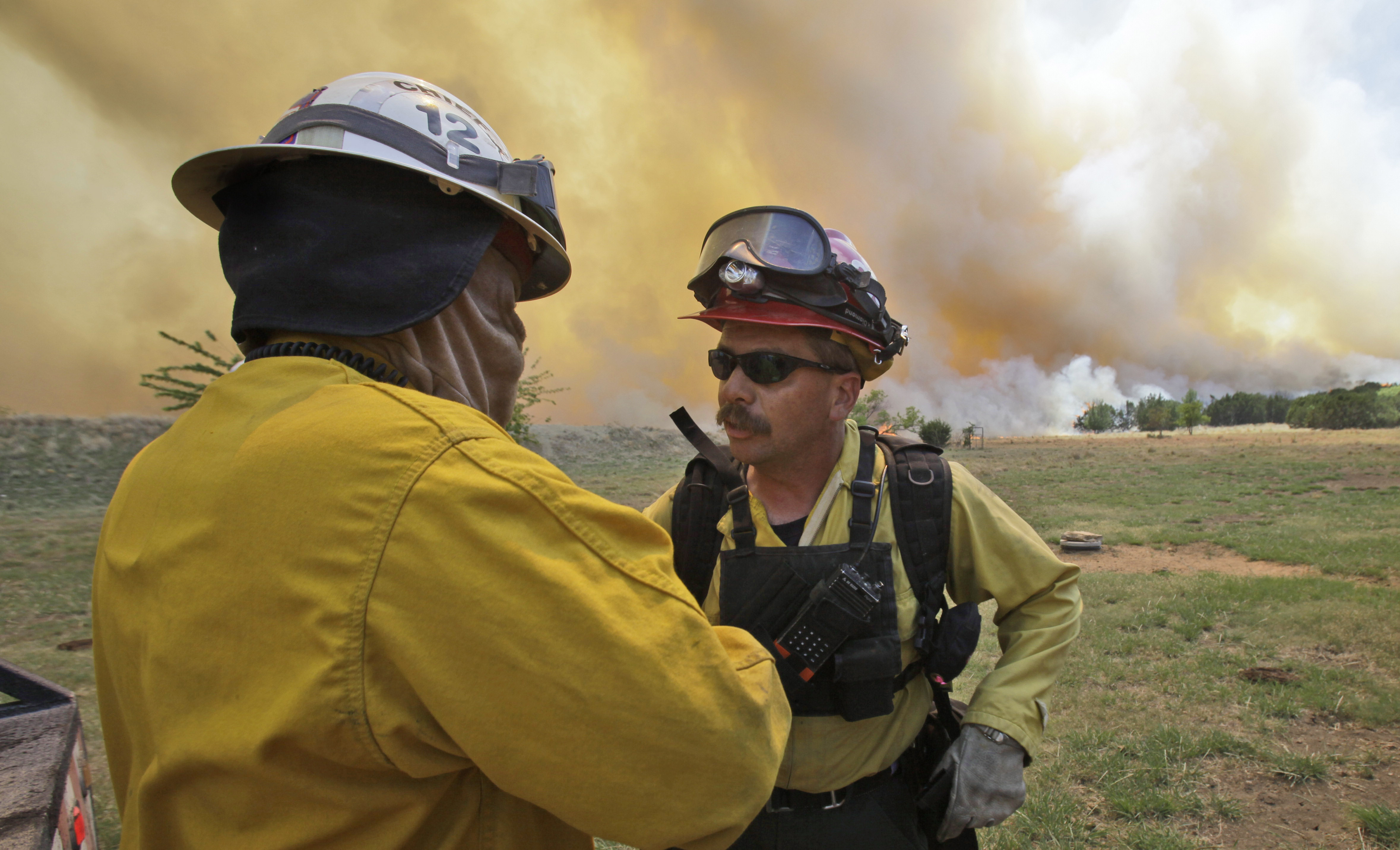 DALLAS - Forecasts calling for cooler weather, increased humidity and possibly even some rain are offering hope for weary firefighters working to tame a massive wildfire that has destroyed hundreds of homes in North Texas.

A canopy of thin clouds was helping to insulate the area around the blaze known as the Possum Kingdom Complex from further heat and drying, while hit-and-miss chances of rain held out at least the possibility of a natural assist to the firefighting effort, said National Weather Service meteorologist Matt Mosier in Fort Worth.

"It looks like the next couple of days will be favorable. The overcast has kept temperatures down and humidities up," Mosier said.

The improving weather has already helped firefighters, reports CBS News correspondent Seth Doane, but he biggest wildfires has so far scorched nearly 150,000 acres and is only 25 percent contained.

Doane toured a firefighting nerve center helping to mobilize agencies from at least 34 states around the country working to fight this fire. Federal officials have now taken the lead, Doane reports.

The Possum Kingdom Complex — about 70 miles west of Fort Worth — has incinerated at least 160 homes. It's one of several Texas wildfires firefighters have battled in recent weeks.

Two firefighters have been killed while fighting the blazes. Mourners laid to rest Wednesday a volunteer firefighter killed last week after apparently being hit by a vehicle. Another firefighter who was burned in a wildfire earlier this month in the Texas Panhandle died Wednesday morning.

Wildfires have scorched more than 1.4 million acres in Texas since Jan. 1, according to the Texas Forest Service, including some massive fires still burning. More than 340 people, including firefighters from local departments and federal agencies and troops from the Texas Army National Guard, have battled the blaze that started in the Possum Kingdom Reservoir area.

The lower temperatures and overcast skies should help make trees and vegetation less flammable, Mosier said. However, a prolonged period of precipitation — indeed, an end to a persistent drought — would be needed to end the wildfire threat, he said.

Afternoon temperatures topped out in the mid-60s Wednesday in the Possum Kingdom Reservoir area, a day after they neared 100 degrees. Conditions were expected to remain the same through the weekend, said David Boyd, spokesman for the federal incident management team coordinating the Possum Kingdom firefight.

"Right now, it looks like Monday before it's hot and windy again," he said.

Since Sept. 1, the beginning of the state's fiscal year, the Texas Forest Service owes $36.3 million for firefighting costs, according to Robby DeWitt, the agency's associate director for finance and administration. Of that, $23.8 million is due the federal government for air support, he said.

A team of federal firefighters and officials from several U.S. agencies — the second one to help with a Texas fire this month — joined local personnel Wednesday, this time to help fight the Possum Kingdom blaze.

Texas has been receiving federal help with West Texas wildfires for more than a week. Personnel from more than a half-dozen federal agencies — including the Forest Service, the National Park Service and the Bureau of Land Management — have been battling some massive fires, including a 150,000-acre fire in Coke County north of San Angelo.

"More of a federal effort is coming into the state now because of the severity of the fires and the number," said Bridget Litten, a spokeswoman for that team, adding that fire crews have made progress in containing that fire.