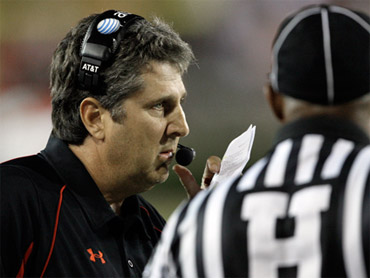 Texas Tech suspended Mike Leach on Monday while the school investigated complaints from receiver Adam James and his family about how the coach treated the player after a concussion.

The school said in a release that defensive coordinator Ruffin McNeill will be the interim coach and lead the team in the Alamo Bowl on Jan. 2 against Michigan State.

Texas Tech officials declined to identify the player, but James' family released a statement to The Associated Press identifying Adam as the player involved.

"Mr. and Mrs. James took the step with great regret and after consideration and prayer to convey to the Texas Tech Administration that their son had been subjected to actions and treatment not consistent with common sense rules for safety and health," the statement said.

"Over the past year, there has been a greatly enhanced recognition of the dangers of concussions and the potential for long term physical damage to players. At virtually every level of football coaching, cases where children and young men have sustained concussions have generated serious discussion of the importance of correct treatment and diagnosis."

A person familiar with James' case said he suffered a concussion during a Dec. 16 scrimmage.

McNeill will remain in charge of the team until the investigation is complete.

There's been internal strife this season with the Red Raiders (8-4), and Leach has resorted to some tongue-lashing.

He chastised players after a loss to Texas A&M in October for listening to "their fat little girlfriends," and thinking the Aggies were a pushover. And after the Red Raiders loss at then-No. 12 Houston in September, Leach suspended indefinitely starting offensive lineman Brandon Carter for violating team rules.

The loss to the Cougars was the second straight for the Red Raiders, who had fallen 34-24 at No. 2 Texas in an early Big 12 matchup. This season is the first since 2002 — Leach's third season — that the Red Raiders dropped two of their first four games.

That same week Leach banned his players from having Twitter pages after linebacker Marlon Williams asked on his account why he was still in a meeting room when "the head coach can't even be on time."

Leach, who was the Big 12 Coach of the Year last season, and the university were at odds for months at the end of last year over negotiations for an extension to his contract following one of the program's best season. The Red Raiders went 11-2 and beat then-No. 1 Texas and climbed to No. 2 in the nation.

At the end of the regular season, with contract talks stalled, Leach traveled to Washington to meet with university officials there who were looking for a new coach. Texas Tech athletic director Gerald Myers was not aware he'd gone.

In February, Leach and Tech agreed to a five-year, $12.7 million deal that could keep him at the school through 2013.

If Tech terminates the contract, the school must pay Leach $400,000 for each year remaining on the agreement. There is no buyout amount.