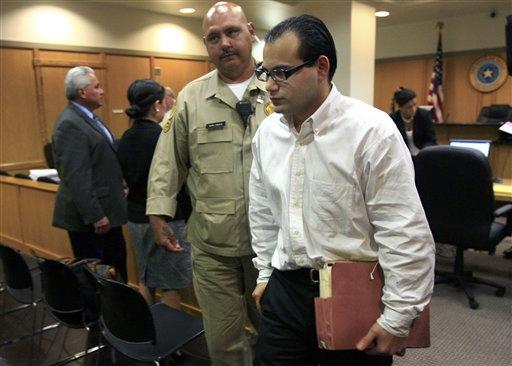 The jurors had deliberated for about four hours.

"I'm sorry it all had to come to this," Rubio said in an open court. "I thank the jury for giving me a chance to show what I could."

It was the second time the south Texas man has been sentenced to death for the slayings. He was convicted of killing the children all under the age of four - smothering, stabbing and ultimately decapitating them - in a windowless Brownsville apartment.

Gonzalez, who said he had sentenced more people to death than any judge in south Texas, said he recognized that a lot of people went through what Rubio did, citing his abusive and troubled childhood.

"I don't know what happened, but I know what this jury found," Gonzalez said. "I have never seen a crime like this."

Jurors on Monday found Rubio guilty on four counts of capital murder - one charge for each child and one for the children together.

Rubio was previously convicted of the murders in 2003 and sentenced to death. But a state appeals court overturned his conviction in 2007 because statements from the children's mother, Angela Camacho, were wrongly allowed as evidence during the trial. Camacho pleaded guilty and is serving a life sentence for her role in the slayings.

At his current trial, Rubio pleaded not guilty by reason of insanity, but the jury rejected that defense.

CBS affiliate KGBT reports that attorney Larry Warner, who will be representing Rubio in his appeal, says that Rubio's appeal of the verdict is automatic.

"The appeal is automatic, you don't even have to file the notice of appeal," said Warner. It could take, he said, four or five months for the case to reach the Texas Court of Criminal Appeals, and once there, the nine judges will determine if the conviction and sentence should stand.

"I've gotten to know this man over the last three years, so to think of him dying on a gurney is very difficult," Stapleton said. Texas executes by lethal injection.

"He misses those children more than anyone else alive," Stapleton said.