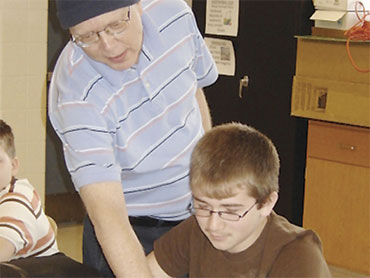 The leader of an Islamic militant group, his wife, and five brothers who work at a Texas computer firm were indicted on charges of trafficking with terrorist states Libya and Syria, Attorney General John Ashcroft announced Wednesday.

"We will pursue the financiers of terror as aggressively as we pursue the thugs who do their dirty work," Ashcroft said at the Justice Department.

Earlier, four of the brothers were arrested in Texas by federal anti-terrorism agents. The fifth brother already was in custody. The brothers worked at Infocom, a computer company in Richardson, Texas, a Dallas suburb.

The indictments also named Mousa Abu Marzook, a senior Hamas leader, and his wife, both believed to be in the Middle East. Ashcroft said Marzook and his wife were accused of conspiring to violate U.S. laws that prohibit dealing in terrorist funds.

The brothers arrested included Infocom vice president, Ghassan Elashi, 48, also identified as a director of the Holy Land Foundation for Relief and Development. The foundation was shut down in December 2001 after the Treasury Department accused the self-described charity of being a front for the Palestinian militant group Hamas and seized its assets.

The other brothers arrested were identified as Bayan Elashi, 47, Basman Elashi and Hazim Elashi, 41. The fifth brother, Ihsan Elashi, is in custody on charges of illegally exporting computer goods to the Middle East.

All five brothers were charged with selling computers and computer parts to Libya and Syria.

"The war against terrorism is a war of accountants and auditors, as well as a war of weaponry and soldiers," Ashcroft said. "Today's charges against a senior leader of Hamas are the latest in an aggressive campaign to identify, disrupt and destroy the sources of funding that make terrorism possible.

The government's case against the Holy Land Foundation was based in part on a 49-page FBI report that said Hamas members met with Ghassan Elsashi and other Holy Land officials in 1993 to discuss raising money for the families of suicide bombers. The report also noted a previously disclosed $210,000 donation from Marzook, a Hamas political leader whose wife is a cousin of the Elashis by marriage.

The Holy Land Foundation raised $13 million in 2000 and claimed to be the largest U.S. Muslim charity, supporting schools and social programs for Palestinians and in predominantly Muslim nations. Its Web site condemned Israel's occupation of Gaza and the West Bank.

Hamas, an Arabic acronym for "Islamic Resistance Movement," was founded in 1987 at the beginning of the first Palestinian uprising against Israel. Hamas does not accept the existence of a Jewish state in the Middle East and does not distinguish between attacks against Israelis inside Israel and in the West Bank and Gaza Strip. In contrast, Yasser Arafat's mainstream Fatah demands a Palestinian state in the West Bank and Gaza alongside Israel.

Hamas has been responsible for many of the 85 suicide bombing attacks that have killed 307 Israelis during 26 months of fighting.

The 33-count indictment accuses the group of illegal exports to Syria and Libya, money laundering, dealing in the property of a designated terrorist and making false statements, Ashcroft said.

The attorney general said the defendants could received up to 45 years each in prison if convicted, and were subject to possible fines up to $7.2 million.

The indictment alleges that Marzook and his wife "engaged in a scheme with Infocom officials to disguise Marzook's capital investment in the company and to continue to receive profits from Infocom.

Infocom and its employees made illegal shipments of computers and computer technology to "state sponsors of terrorism, Libya and Syria."

Marzook and the Elashi brothers attempted to conceal the shipments from the authorities.

The flow of money to terrorist groups remains a key concern not only for the "war on terror" itself but also for relations among allies in that war.

The issue of terror financing strained ties between the Bush administration and the Saudi family last month, when reports surfaced that the wife of the Saudi ambassador to the United States had written checks that ultimately went to men who aided Sept. 11 hijackers.

At that time, it was reported that the Bush administration was trying to come up with new ways to stem the flow of resources to terror groups.

"More important than arresting the individuals who might do the acts is to deprive them of the money that they need to do those acts," he said.