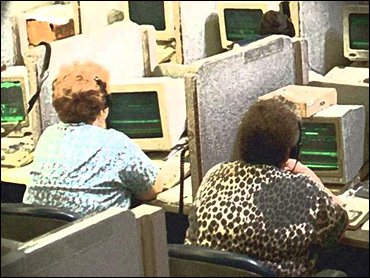 Perhaps New York State's Consumer Protection Board got a little carried away celebrating their strike against telemarketers, but if you've ever had your dinnertime disturbed with a call - and who hasn't - you can understand.

To mark the one-year anniversary of the state's "do not call" list, the board celebrated by crushing about 100 telephones with a steamroller Monday in New York City.

"New Yorkers have a recourse now for unwanted and illegal telemarketing calls if they sign up for our registry," said May Chao of New York's Consumer Protection Board.

At 2 million people, it's the largest list of its kind in the country, reports CBS News Correspondent Jim Axelrod.

"And this registry is disseminated to the telemarketers who have to purchase the list and once your name is on the list, you're not supposed to be called at home," explained Chao.

New York is one of 20 states that have do-not-call laws, and another half dozen states are working their own.

"Tele-nuisance calls are an assault on our rights as well - our fundamental right to be left alone," said Bob Bulmash, a telemarketing critic.

Public nuisance #1? The fact is, these calls don't annoy everyone. Some 24 billion calls are made each year nationally. 180 million of those calls hit pay-dirt, leading to sales of $661 billion in goods and services.

What bothers Mattingly is that politicians have exempted one group from the "do-not-call" laws.

"They have exempted themselves from all of these laws, so they are perfectly free to call you at any time and solicit money," he said.