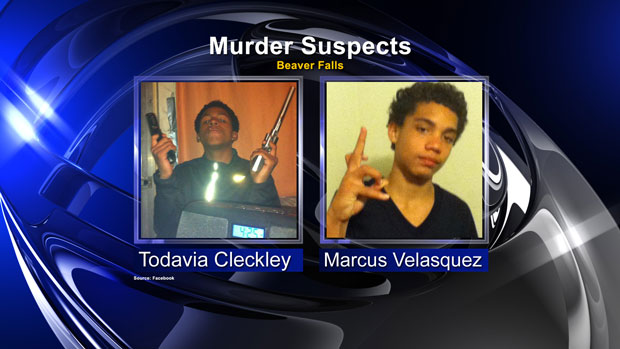 (CBS/AP) BEAVER FALLS, Pa. - A western Pennsylvania mother was shot and killed after she told three teens to "get a job" when she saw them trying to bum a cigarette off her boyfriend, police say.

Beaver Falls police have charged 14-year-olds Todavia Cleckley and Marcus Velasquez and 13-year-old Kyle Goolsby Jr. with conspiracy to commit criminal homicide and other charges in Saturday's shooting of Kayla Peterson, 22. She was shot around 3:30 p.m. that day and died in a Pittsburgh hospital two hours later.

According to police, the teens followed Peterson's boyfriend, William Bailey, home from the store asking him for cigarettes.

"My girlfriend came outside to see what was going on because there was commotion and she told them to go get a job and quit running the streets and quit bumming cigarettes. The kid was standing over in the alleyway and he just shot at her," Bailey said, according to CBS affiliate KDKA.

The police later identified Velasquez as the teen who pulled the gun out and fired one fatal shot.

Under Pennsylvania law Goolsby and Cleckley are charged with conspiracy because they were allegedly part of the overall incident in which Peterson was killed.

Goolsby was arrested Monday, but Cleckley and Velasquez remained at large as of Tuesday. According to KDKA, police expect to arrest the remaining suspects soon.

Officials at Big Beaver Falls Area School District released a statement saying all three suspects have not "been part of the student body or within the district's buildings for over a year," without elaborating.

Bailey said he's struggling with the loss of his fiancé and explaining her death to their daughter, Ellionna, who will be two in January.