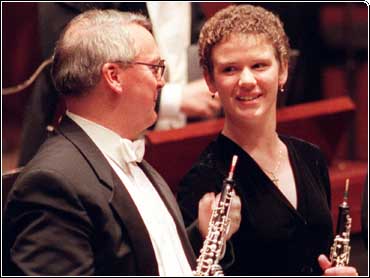 A wish came true earlier this month for a 16-year-old Grass Valley, California, girl who has had Hodgkins Disease, a form of cancer: Sixteen-year-old Johanna Johnson played oboe with the New York Philharmonic.

"The music was all around me and I could feel the bass drum and the tympani and everything through my feet," she told CBS News Early Show Co-Anchor Jane Clayson.

Johanna's wish was granted by the Make A Wish Foundation. Most recipients, Clayson noted, ask for a trip to Disney World or a chance to meet a sports star.

Instead, she met Joseph Robinson, the orchestra's principal oboist, who said he was overwhelmed by the experience.

"It's not what I expected," he said. "And it's just that with unlimited choice, Johanna decided that her dream would be to sit in an orchestra, not to be a soloist, not to meet the music director or to get an autograph from the guest artist or even take a lesson from me."

The musicians also gave Johanna a gift: A professional-quality $5,000 oboe.

"I was receiving a lesson, which was great," she recalled. "I was really pleased about the lesson, and Joe walked out of the room and came back with an oboe and I was blown away."

As part of her wish, Johanna and her family also attended a performance at the Metropolitan Opera and met the Met's oboist, and a performance of Les Miz.

"I hope I can be somebody's wish some day," she said. "I've only experienced it from my point of view. It would be so neat for someone to say 'I wish to meet Johanna Johnson.'"

Robinson said members of the orchestra were moved during Friday's rehearsal when Johanna was introduced to them, many of the women crying.

"She's come to us like a Christmas angel in a way we didn't expect, all because by affirming her preference, she reconfirmed our life choice," he said. "Johanna reminded me of why I wanted to play in the New York Philharmonic more than anything when I was 16.