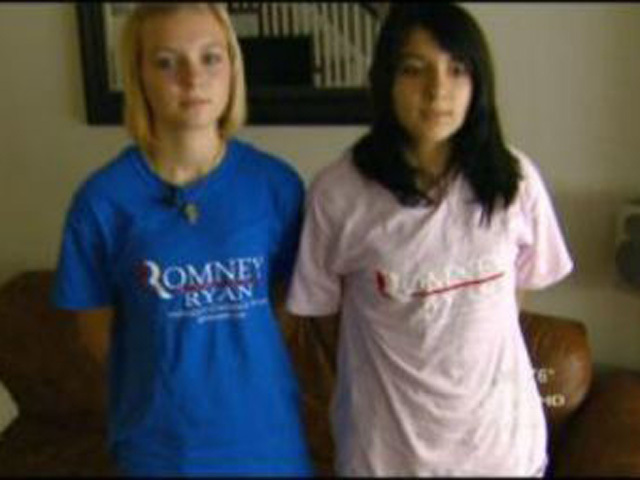 PHILADELPHIA A 16-year-old high school sophomore who says she was ridiculed by her geometry teacher for wearing a Mitt Romney T-shirt returned to school Tuesday following a rally by cheering supporters. The teacher has also written a letter of apology that was read aloud to students.

Samantha Pawlucy hadn't been back to Charles Carroll High School in the city's Port Richmond section since last week. That's when she and her family say she was mocked by her teacher for wearing the shirt supporting the Republican presidential candidate. She said the teacher questioned why she was wearing the shirt and called others in to the room to laugh at her.

Pawlucy, whose family had expressed concern for her safety, returned Tuesday after a rally that featured supporters singing the national anthem and reading the First Amendment — as well as shouts of supporters calling "Go, Sam!" and "You're great, Sam!"

The school's principal read students the letter of apology from geometry teacher Lynette Gaymon on Tuesday.

"I'm very sorry for all the chaos and negative attention that has surrounded the school in the past couple of weeks," she wrote. "What I meant as a light and humorous remark during class has developed into a huge conflict between students, faculty, parents and neighbors. My words were never meant to belittle Ms. Pawlucy, or cause any harm, and I truly regret that we have come to this point."

Pawlucy wore the pink "Romney/Ryan" shirt to "dress-down" day on Sept. 28. She said that during class, Gaymon pointed out the shirt, questioned why she was wearing it and told her to leave the classroom. Gaymon, Pawlucy said, said it was a "Democratic" school and compared it to wearing a "KKK" shirt.

Her father, Richard Pawlucy, said the family met with Democratic Mayor Michael Nutter on Sunday night to discuss a resolution. The teacher has apologized and the district's superintendent William Hite Jr. has called the ordeal a "teachable moment."

Hite has said he would work with Nutter and the teacher's union to move "towards a conversation that brings together diverse beliefs, inspires understanding, and heals."