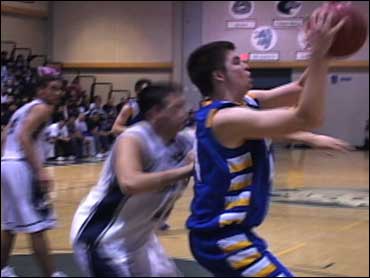 At El Toro High School outside Los Angeles, 18-year-old Jimmy Albright stands out. With a 4.0 GPA, he's at the top of his senior class - and at 6 foot 6, he towers over his teammates.

But that's not all that stands out about Jimmy, reports CBS News' Brandon Scott. Jimmy is legally blind - one of just about 3,000 Americans with a condition called Aniridia. Born without irises, his eyes are just pupils. He can't see what's written on the board. To see what's written in his book, his face nearly touches the page. Yet Jimmy excels - even on the basketball court.

A starting center, he's a defensive force. And despite his limited vision, still averages around 6 points a game.

"I guess I just haven't accepted the limits," Jimmy said.

That's how Jimmy lives his life - without limits - refusing to let his condition eclipse his success. He pushed his team to their seventh straight league championship.

But Jimmy doesn't see himself as an inspiration.

"Everyone seems amazed by me, and to me, it's just basketball," he said. "Just second nature. If you want something, you just got to go for it. Just give it your all."

Jimmy and his team lost in the playoffs. But that didn't get him down. The very next day, he traded his basketball for a microphone, and took his message of determination to the airwaves. He told his story on a Los Angeles sports radio show. Sports psychologist Dr. Casey Cooper was impressed.

"What may be a paralyzing experience to one family or athlete is motivation to another. And it has to do with this intangible resiliency," Cooper said. "And he's got it."

Jimmy said the resiliency comes from his family.

"My parents just said you can do whatever you want to do," he said.

Indeed, his mom is one of his biggest supporters.

"Jim is so talented in so many ways that God kind of balanced it by taking away part of his eye sight," said Jimmy's mom, Trisa Albright.

"I hope people just learn not to accept limitations," Jimmy said. "Even if you think something's standing in your way."

Nothing, it seems, stands in his.