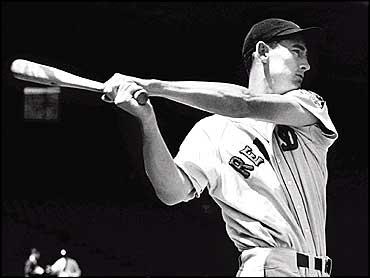 Ted Williams was decapitated by surgeons at the cryonics company where his body is suspended in liquid nitrogen, and several samples of his DNA are missing, Sports Illustrated reported.

The magazine's report, appearing in the issue that hits newsstands Wednesday, is based on internal documents, e-mails, photographs and tape recordings supplied by a former employee of Alcor Life Extension Foundation.

After Williams died July 5, 2002, his body was taken by private jet to the company in Scottsdale, Ariz. There, Williams' body was separated from his head in a procedure called neuroseparation, according to the magazine.

Williams' eldest daughter, Bobby-Jo Williams Ferrell had fought against the process, saying that her dad had asked and requested in his will to be cremated and his ashes, scattered off the Florida coast.

Yet Williams' signature, along with John Henry and Claudia's had appeared at the bottom of handwritten note dated more than three years after the baseball star signed a will asking to be cremated.

"JHW, Claudia and Dad all agree to be put into biostasis after we die," reads the pact, which family attorney Bob Goldman said was written in a Gainesville hospital room before the Hall of Fame slugger underwent surgery.

"This is what we want, to be able to be together in the future, even if it is only a chance," the document said.

Sports Illustrated said that according to a taped conversation between former Alcor chief operating officer Larry Johnson and a board adviser, eight DNA samples among 182 taken from Williams are missing without explanation.

Spokeswoman Paula Lemler, wife of Alcor chief executive officer Jerry Lemler, told The Associated Press on Tuesday that company officials had not seen the article and would have no comment.

31 bodies, some decomposing, found at Indiana funeral home
Thanks for reading CBS NEWS.
Create your free account or log in
for more features.
View CBS News In
CBS News App Open
Chrome Safari Continue
Be the first to know
Get browser notifications for breaking news, live events, and exclusive reporting.