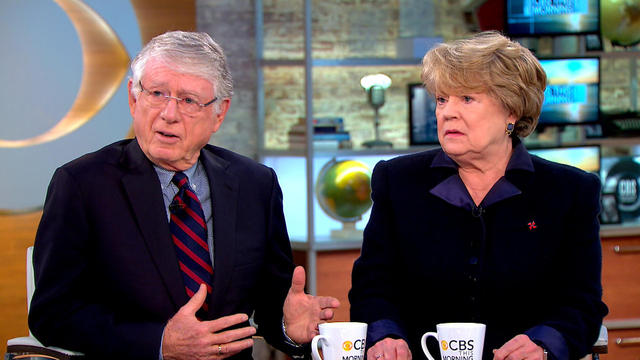 One of the leading causes of death in the United States is often under-reported and misunderstood.

Chronic Obstructive Pulmonary Disease, or COPD, is the nation's third-biggest killer, after heart disease and cancer. About 150,000 Americans die of COPD each year.

Among women, it is more deadly than breast and ovarian cancers combined.

Veteran newsman Ted Koppel focuses on the disease for a report next weekend on CBS' "Sunday Morning," in which he interviews his wife, Grace Anne. She was given only a few years to live when she was diagnosed 16 years ago.

Today, the couple advocates for more research into prevention and treatment.

Appearing on "CBS This Morning," Grace Anne explained why she thinks the disease is such a mystery to so many.

"I believe it's because of the failure to have a cure," she said. "People don't realize that it is highly treatable. Family doctors often don't ask about the symptoms and signs, and patients themselves don't know to say, 'Look, I have a constant cough.'"

She first realized she had a problem when she had difficulty breathing. "I literally could not walk across a space like this room without stopping to catch my breath," she said. "I couldn't sleep without pillows propped up behind my back. I couldn't walk up a few steps.

"I thought I had a rare disease. It was a great shock to me to find out that my disease was so common and it's not curable, it's not reversible. We have no medications to stop the progress of the disease."

Grace Anne was not diagnosed with COPD at first: "I was told if I lost ten pounds I'd feel like a new woman. It was six weeks after that [when] I was literally stopped in my tracks. I couldn't do anything."

Ted Koppel was asked about his reaction to her doctor's diagnosis of his wife: ""Grace Anne asked, 'How much time do I have?' She was told, 'Three to five years. You need to start making end-of-life preparations.' We just went back to the hotel, held each other all night long and sobbed. It was devastating.

"First of all, doctors don't diagnosis it as quickly as they should. Then they tell people, 'You've got an incurable disease. There are only a couple of years to live.' If people aren't depressed before they go to a doctor's office, they walk out of there wondering, How are we going to survive?"

So far Grace Anne has beaten the odds, though she has had access to treatments not readily available. "The treatment is inhaled medications similar to the medications used for asthma, and they have to be taken on a daily basis and exactly as prescribed," she said. "The other treatment we have, that only 3% of Americans have an opportunity to participate in, is pulmonary rehabilitation, which is a comprehensive program of knowledge about the disease, exercise, learning about nutrition, learning when you're going to have exacerbation, which is a lung attack basically -- and that is not [easily] available."

Koppel said that about 30 million Americans -- about three percent -- have the disease, though 10-15 million have not yet been diagnosed.  "We've got to diagnose them," he said. "We've got to increase the availability of pulmonary rehabilitation.

"Here's another little kicker: It is the number three killer in the country. You know where it stands in terms of funding at NIH? 155th."

Grace Anne said that because so many smokers do get COPD, there is a tendency of people to say, "Hey, you've got no one to blame but yourself." However, "while most people with COPD are ex-smokers, 8 in 10 smokers don't get COPD -- and 25 percent of those diagnosed have never smoked a cigarette."

She alerted anyone who has constant coughing, shortness of breath, is an ex-smoker or who worked in an occupation with a lot of dust, vapors and gas, to mention it to their doctor, and get tested.