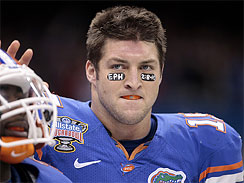 A national coalition of women's groups called on CBS on Monday to scrap its plan to broadcast an ad during the Super Bowl featuring college football star Tim Tebow and his mother, which critics say is likely to convey an anti-abortion message.

"An ad that uses sports to divide rather than to unite has no place in the biggest national sports event of the year - an event designed to bring Americans together," said Jehmu Greene, president of the New York-based Women's Media Center.

The center was coordinating the protest with backing from the National Organization for Women, the Feminist Majority and other groups.

CBS said it has approved the script for the 30-second ad and has given no indication that the protest would have an impact. A network spokesman, Dana McClintock, said CBS would ensure that any issue-oriented ad was "appropriate for air."

The ad - paid for by the conservative Christian group Focus on the Family - is expected to recount the story of Pam Tebow's pregnancy in 1987 with a theme of "Celebrate Family, Celebrate Life." After getting sick during a mission trip to the Philippines, she ignored a recommendation by doctors to abort her fifth child and gave birth to Tim, who went on to win the 2007 Heisman Trophy while helping his Florida team to two BCS championships.

The controversy over the ad was raised Sunday when Tebow met with reporters in Mobile, Ala., before beginning preparations for next weekend's Senior Bowl.

"I know some people won't agree with it, but I think they can at least respect that I stand up for what I believe," Tebow said. "I've always been very convicted of it (his views on abortion) because that's the reason I'm here, because my mom was a very courageous woman. So any way that I could help, I would do it."

Thirty-second commercials during the Super Bowl are selling for $2.5 million to $2.8 million. Gary Schneeberger, a spokesman for Focus on the Family, said funds for the Tebow ad were donated by a few "very generous friends" and did not come from the group's general fund.

Schneeberger said he and his colleagues "were a little surprised" at the furor over the ad.

"There's nothing political and controversial about it," he said. "When the day arrives, and you sit down to watch the game on TV, those who oppose it will be quite surprised at what the ad is all about."

The protest letter from the Women's Media Center suggested that CBS should have turned down the ad in part because it was conceived by Focus on the Family.

"By offering one of the most coveted advertising spots of the year to an anti-equality, anti-choice, homophobic organization, CBS is aligning itself with a political stance that will damage its reputation, alienate viewers, and discourage consumers from supporting its shows and advertisers," the letter said.

However, Schneeberger said CBS officials carefully examined Focus on the Family's track record and found no basis for rejecting the ad.

"We understand that some people don't think very highly of what we do," Schneeberger said. "We're not trying to sell you a soft drink - we're not selling anything. We're trying to celebrate families."

The idea for the ad came from an employee in Focus on the Family's film department, Schneeberger said, and the Tebows "were thrilled" when it was proposed to them. The Tebows, including Tim, have been outspoken in discussing their Christian faith and their missionary work.

All the national networks, including CBS, have policies that rule out the broadcast of certain types of contentious advocacy ads. In 2004, CBS cited such a policy in rejecting an ad by the liberal-leaning United Church of Christ highlighting the UCC's welcoming stance toward gays and others who might feel shunned by more conservative churches.

CBS was criticized for rejecting that ad - and perhaps might have worried about comparable criticism from conservatives if it had rejected an ad featuring such a charismatic and well-known figure as Tebow.

CBS noted that it had run some advocacy ads in recent months, including spots taking conflicting sides in the debate of a national health care overhaul.

Terry O'Neill, the president of the National Organization for Women, said she had respect for the private choices made by women such as Pam Tebow but condemned the planned ad as "extraordinarily offensive and demeaning."

"That's not being respectful of other people's lives," O'Neill said. "It is offensive to hold one way out as being a superior way over everybody else's."

A national columnist for CBSSports.com, Gregg Doyel, also objected to the CBS decision to show the ad, specifically because it would air on Super Sunday.

"If you're a sports fan, and I am, that's the holiest day of the year," he wrote. "It's not a day to discuss abortion. For it, against it, I don't care what you are. On Super Sunday, I don't care what I am. Feb. 7 is simply not the day to have that discussion."