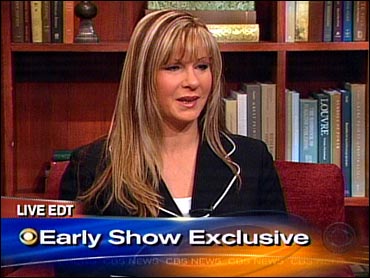 "Terrified. Crawling for my life. I really did not think I was going to make it," Heidi Gill said on CBS News' The Early Show, referring to being Tasered by a police officer earlier this month.

Ohio police are investigating an officer's use of a stun gun on the handcuffed woman, who fell to the pavement and was knocked unconscious when the officer shocked her.

Video from Patrolman Richard Kovach's cruiser shows him jolting the screaming woman with a Taser electronic device both before and after she was handcuffed.

"The pain just wouldn't stop, it was so much, so much. I just didn't think it was going to stop ever," Gill, 38, told The Early Show co-anchor Hannah Storm Tuesday.

She was arrested Sept. 2 on charges of falsification, assault, resisting arrest, criminal damaging and unauthorized use of a motor vehicle, officials said. She has pleaded not guilty. A hearing is set for Oct. 25 in Warren Municipal Court.

"It's just a traumatic thing that I relive every day. At night, I see it. It's just never-ending," Gill said on The Early Show. "The worst thing is the impaired vision. I see two of you right now, sometimes three."

It's also affecting the single mother's ability to take care of her 4-year-old son.

"I can't explain to him why I can't drive. I can't pick him up. I can't play ball with him because I can't see the ball coming towards me. I can't play chase because I get dizzy," Gill said. "I don't know how to deal with what I'm feeling."

Gill had been ordered out of a bar.

"We were at a wedding so we did have some drinks. We went to the bar afterwards with a lot of people from the wedding. We did have drinks and we were dancing, having a really good time," Gill recalled. "The altercation started, you know, some words were exchanged and they asked me to leave and I was fine with that.

"I was leaving the bar, was walking out" when she first encountered Kovach. She kept heading to the parking lot.

A friend had said he would drive her home, and she should wait in his car. She may have gotten into the wrong car.

"I'm just sitting there relaxing, waiting for my ride home and the door swung open, 'Get out of the car.' I said no. I was scared at how abrupt it was," Gill said.

"And then the next thing I know I was feeling this electrocution. I couldn't move let alone get out of the car but I was trying," she said.

Kovach's report said he made several attempts to use the Taser on Gill, but it misfired repeatedly. Once inside the cruiser, his report said, she kicked at a rear window and tried to climb into the front seat, ignoring his commands to stop, the police report said.

"I'm locked in the back of a car of someone that just abused me," Gill said Tuesday, admitting that she was kicking at the police car window.

"I deployed a second Taser cartridge into her and the violent turbulent action stopped immediately," the report said. "I then requested a car with a cage for transport."

She was again stunned during an attempted transfer to the second car. She fell and was knocked unconscious, and an ambulance took her to a local hospital, the report said.

But attorney Mark Hanni says the videotape of the incident tells a different story.

"He Tases her in the back seat of the vehicle after she already calmed down. She had quit kicking at that point and was sitting upright and he started Tasing her," Hanni told Storm. Plus, "He kicked her while she was on the ground. This is just totally unacceptable behavior on the part of anyone, let alone a policeman."

Taser use by police is getting national attention, after video surfaced on the Internet of police shocking a university student in Florida who persistently questioned Sen. John Kerry during a forum and refused to yield the microphone to others. University of Florida President Bernie Machen said the use of the Taser was "regretful." He requested a state probe of campus police actions and placed two officers on leave.

California sheriff's officials are defending their use of a Taser stun gun to subdue an autistic teenager who left a social services center where he was being treated.

"It was necessary," sheriff's spokesman Jim Amormino said in defense of the use of a Taser stun gun to subdue 15-year-old Taylor Karras.

He said the teen was running in and out of traffic and is lucky to be alive.

"If that were your son, would you want him Tased or hit by a car?" Amormino asked.

But his parents said they believed deputies overreacted.

In Warren, Ohio, Officer Kovach is on paid administrative leave, and the city of Warren is conducting an investigation. Attorney Hanni is calling for Department of Justice and Ohio attorney general investigations

"I don't want anyone else to ever go through this again," Gill said Tuesday on The Early Show.