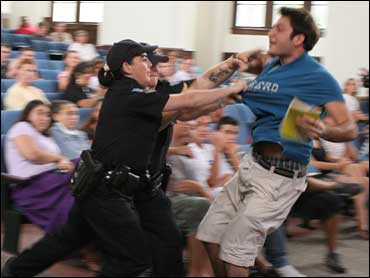 University of Florida President Bernie Machen said Monday's takedown, in which the student loudly yelled, "Don't Tase me, bro!" was "regretful." He asked for a state probe of campus police actions and placed two officers on leave.

The student in the middle of it all, 21-year-old Andrew Meyer, had no comment after he was released on his recognizance on various charges following a night in jail.

But details from his online writings and videos raised the question of whether his harangue during the forum was genuine or some kind of stunt.

Meyer, a senior telecommunications major from the Fort Lauderdale suburb of Weston, has a Web site featuring several homemade videos. In one, he stands in a street with a sign that says "Harry Dies" after the latest Harry Potter book was released. In another, he acts like a drunk in a bar while trying to pick up a man dressed in drag.

The site also has what is called a "disorganized diatribe" attributed to Meyer that criticizes the Iraq war, the news media for not covering the conflict enough and the American public for paying too much attention to celebrity news.

Another site had pictures of Meyer licking a woman's face and making a suggestive pose as he stood behind a fake cow. The site listed his activities as "getting wasted" and "being ridiculous."

Various videos of the arrest had been viewed more than 1 million times on YouTube as of Tuesday evening and were in heavy rotation on TV news.

Benjamin Dictor, a liberal arts junior speaking for the group, called for the officers to be disciplined, Tasers to be banned on campus and the charges dropped.

"For a question to be met with arrest, not to mention physical violence, is completely unacceptable in the United States, especially in the halls of education," Dictor said.

On a Facebook page set up in support of Meyer, writers debated who overreacted more — campus police, Meyer, or both, reports CBS News correspondent Kelly Cobiella.

University police said in a news release that officers had been summoned by the forum's sponsors to escort Meyer from the building, though organizers disputed that and said his microphone was cut off after he used a sexually explicit term.

Police added that Meyer was Tasered because he resisted when officers were attempting to place him in handcuffs. His lawyer, Robert Griscti, said it appeared Meyer was shocked after the cuffs were already on.

Just before Monday's scuffle started, Meyer asked a woman to tape his exchange with Kerry. One officer said the woman was "there to film him" and that Meyer asked, "Are you taping this? Do you have this? You ready?" before beginning his question.

Another officer said the 22-year-old woman said she was in line to ask a question ahead of Meyer when she was asked to tape, but she did not know him.

Meyer refused to leave the microphone after his allotted time was up, police said. He had asked Kerry about impeaching President Bush, why he didn't challenge the 2004 election results and whether he and Bush were members of the secret society Skull and Bones at Yale University.

After Meyer repeatedly and loudly refused to walk away, two officers took him by the arms. Kerry can be heard saying, "That's all right, let me answer his question."

Audience members applauded, though it was difficult to tell whether it was for the officers' action or Kerry's remark. The audience for the most part sat quietly and watched the fracas.

Meyer struggled for several seconds as up to four officers tried to remove him from the room. He screamed for help and tried to break away from officers with his arms flailing, then was forced to the ground and ordered to stop resisting.

As Kerry told the audience he will answer the student's "very important question," Meyer yelled at the officers to release him, crying out, "Don't Tase me, bro," just before he was shocked. He was led from the room, screaming, "What did I do?"

An officer, however, said in the police report that Meyer's "demeanor completely changed once the cameras were not in sight" and that he was "laughing" and "lighthearted" on the way to jail.

Kerry, D-Mass., said Tuesday he regretted that a healthy discussion was interrupted, and said he never had a dialogue end that way in 37 years of public appearances.

"Whatever happened, the police had a reason, had made their decision that there was something they needed to do. Then it's a law enforcement issue, not mine," he told The Associated Press in Washington.

Griscti said Meyer was resting and wouldn't speak with reporters.