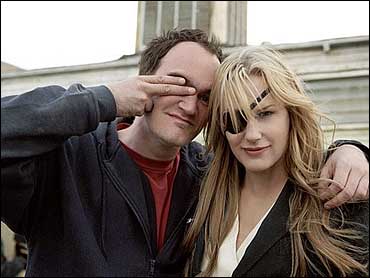 With just four films under his belt, including "Reservoir Dogs" and "Pulp Fiction," Quentin Tarantino has gained a reputation as one of the most innovative directors of all time. "Kill Bill: Volume 2" is in theaters now, and Tarantino tells The Early Show co-anchor Harry Smith that "it's definitely the biggest movie I've ever done. It's like the biggest mountain I've ever had to climb."

Both volumes of "Kill Bill" tell a tale of bloody revenge. Uma Thurman plays a disciple of Bill, a character played by David Carradine.

As Tarantino explains it: "He leads a hit team. She's probably one of the best female assassins in the world. They are lovers and (she's) kind of the queen bee of all these assassins, most of them being female. She tries to leave and start a new life. He tracks her down at her wedding, puts a bullet in her head, thinks he's killed her but he's only put her in a coma. When she comes out of the coma, she's tracking them all down."

In some part of the movie, Tarantino works in black and white. "I've always liked black and white," he explains. "I like creating a situation, as far as some grammar is concerned, that I can go anywhere I want, don't need to explain it. This sequence can be in black and white, another animation. Another one can be more cartoony. If you set up that kind of language, once you set it up, then you can do whatever you want, whatever's appropriate."

David Carradine, well known for playing the lead role in the TV series "Kung Fu," may appear to be the only logical choice to play Bill. But the part originally was written for Warren Beatty.

"As I was writing it, I was thinking about Warren and talking to him," says Tarantino. But the part grew so large that it became a bigger time commitment than Beatty could make.

"But as I was writing it, thinking about Warren, I read Carradine's autobiography ('Endless Highway')," he recalls. "It's one of the best I've read in my life, almost like a Dickens story. As I'm reading it, I thought, 'This guy is Bill.' I thought he was a fantastic actor, anyway."