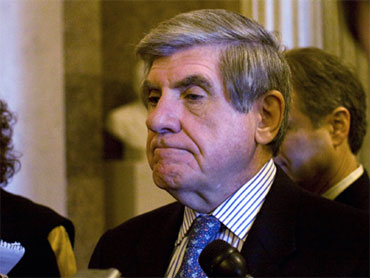 McCain was echoing Republican criticism that votes for the bill, as Sen. Saxby Chambliss of Georgia said, "have been bought." But what exactly did he mean?

Critics say the "Cornhusker kickback" was added to the health care bill to appease Ben Nelson, the Nebraska Democrat (pictured at left) who until this weekend was the final holdout keeping Democrats from getting the 60 votes they needed to overcome filibuster.

The deal gives Nelson's home state of Nebraska "a permanent exemption from the state share of Medicaid expansion for Nebraska, meaning federal taxpayers have to kick in an additional $45 million in the first decade," as Politico notes.

The "Louisiana Purchase," of course, is the name given to the United States' acquisition of a large swath of what is now the middle of the country in the early 1800s. But within the context of the health bill, it's the name critics have given the inclusion of $100-$300 million in added federal aid for Medicaid recipients in Louisiana, the home state of Sen. Mary Landrieu. (Notes Foxnews.com: "The actual Louisiana Purchase was considerably cheaper.")

On his twitter feed, McCain described the "Florida Flim Flam" as "a deal to grandfather Medicare Advantage enrollees in Florida – apprx $5 Billion." That provision is tied to Florida Democrat Bill Nelson, who denies that he negotiated a special deal for Democratic south Florida.

Not every provision that critics have deemed a giveaway has a special nickname. The New York Times details how Minnesota Democrat Max Baucus, one of the main authors of the Senate bill, included in the legislation an expansion of Medicare to cover people exposed to asbestos from a Libby, Mont., mine. (Said Baucus in defending the provision: "The people of Libby were poisoned and have been dying for more than a decade.")

Also in the bill, the Times notes, is an item that increases Medicare payments to hospitals and doctors in states where half the counties are "frontier counties" -- which means they have small population densities. Those states? Montana, North Dakota, South Dakota, Utah and Wyoming.

Vermont Sen. Bernie Sanders, meanwhile – who complained that the bill was not liberal enough – secured $10 billion to increase community health centers around the country, including two in his home state.

Also in the bill: Additional Medicaid funding for Vermont and Massachusetts; Medicare Advantage protections for New York and Pennsylvania, in addition to Florida; and $100 million for a health care facility/medical school in an unknown state, possibly Pennsylvania or Connecticut.

"You'll find a number of states that are treated differently than other states," Senate Majority Leader Harry Reid acknowledged over the weekend. "That's what legislating is all about. It's compromise."