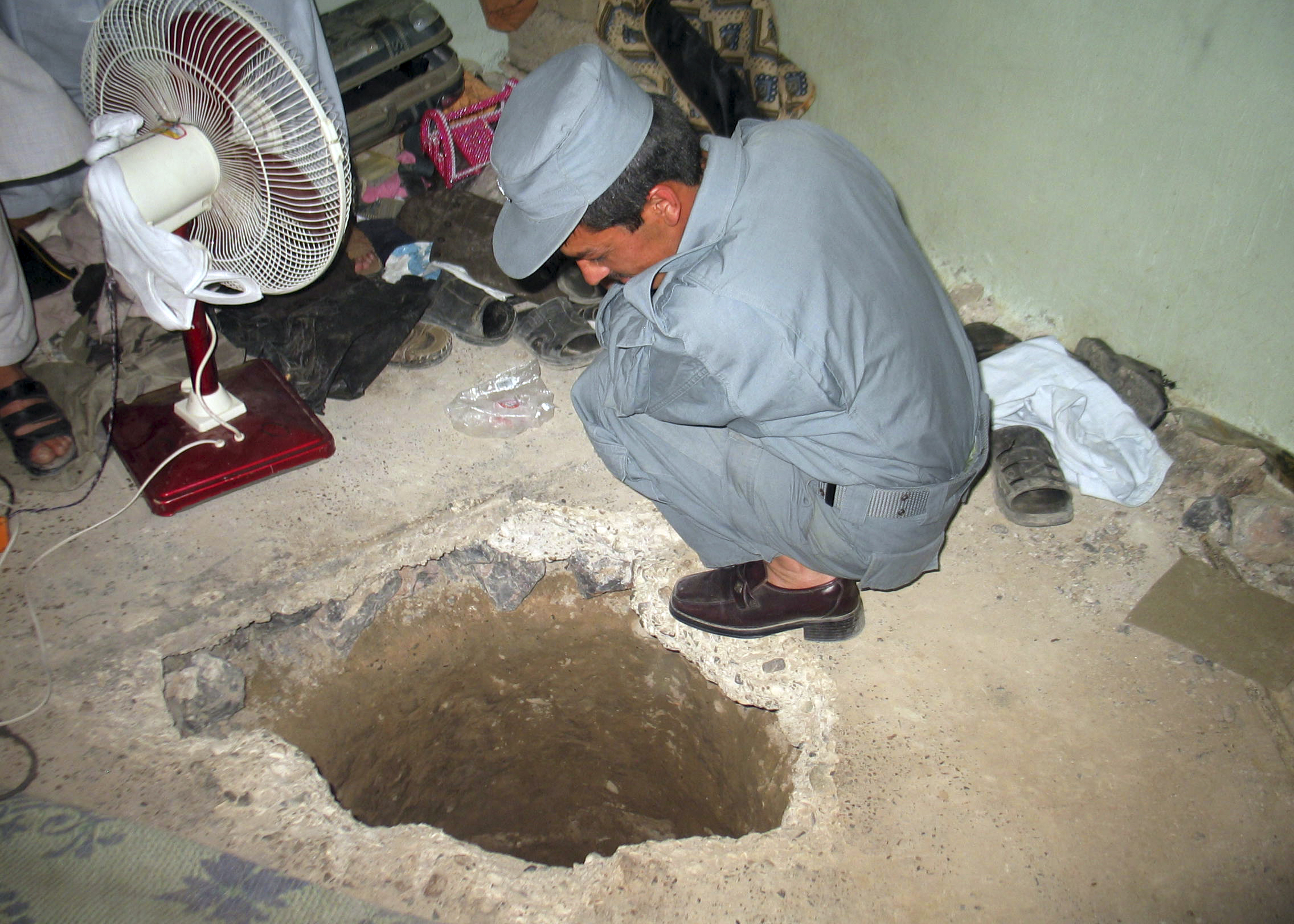 The diggers finally poked through Sunday and spent 4½ hours ferrying away more than 480 inmates without a shot being fired, according to the Taliban and Afghan officials. Most of the prisoners were Taliban militants.

Accounts of the extraordinary prison break, carried out in the dead of night, suggest collusion with prison guards, officials or both.

Following a recent wave of assassinations here, the breakout underscores the weakness of the Afghan government in the south despite an influx of international troops, funding and advisers. It also highlights the spirit and resourcefulness of the Taliban despite months of battlefield setbacks.

Officials at Sarposa prison in Kandahar city, the one-time Taliban capital, say they discovered the breach at about 4 a.m. Monday, a half-hour after the Taliban say they had gotten all the prisoners safely to a house at the other end of the tunnel.

Government officials corroborated parts of the Taliban account. They confirmed the tunnel was dug from a house within shooting distance of the prison and that the inmates had somehow gotten out of their locked cells and disappeared into the night. Kandahar remains relatively warm even during winter and the ground would not have frozen while insurgents were digging the tunnel.

Police showed reporters the roughly hewn hole that was punched through the cement floor of the prison cell. The opening was about 3 feet (1 meter) in diameter, and the tunnel dropped straight down for about 5 feet (1.5 meters) and then turned in the direction of the house where it originated.

But access was denied to the tunnel itself, and it was unclear how the Taliban were able to move so many men out of the prison so quickly. Also unclear was why guards would not have heard the diggers punch through the cement floor, and whether they supervise the inside of the perimeters at night.

A man who claimed he helped organize those inside the prison told The Associated Press in a phone call that he and his accomplices obtained copies of the keys for the cells ahead of time from "friends." He did not say who those friends were.

"There were four or five of us who knew that our friends were digging a tunnel from the outside," said Mohammad Abdullah, who said he had been in Sarposa prison for two years after being captured in nearby Zhari district with a stockpile of weapons. "Some of our friends helped us by providing copies of the keys. When the time came at night, we managed to open the doors for friends who were in other rooms."

He said the diggers broke through Sunday morning and that the inmates in the cell covered the hole with a prayer rug until the middle of the night, when they started quietly opening the doors of cells and ushering prisoners in small groups into the tunnel.

He said they woke the inmates up four or five at a time to sneak them out quietly. They also didn't want too many people crawling through the narrow and damp tunnel at one time because of worries that they would run out of oxygen, Abdullah said.

The AP reached Abdullah on a phone number supplied by a Taliban spokesman. His account could not immediately be verified.

The Taliban statement said it took 4¼ hours for all the prisoners to clear the tunnel, with the final inmates emerging into the house at 3:30 a.m. They then used a number of vehicles to shuttle the escaped convicts to secure locations.

Reporters were not allowed into that building, but officials pointed out the mud-walled compound with a brown gate and shops on either side.

The city's police mounted a massive search operation for the escaped convicts. They shot and killed two inmates who tried to evade capture and re-arrested another 26, said Tooryalai Wesa, the provincial governor.

But there was no ignoring that the Taliban had pulled off a daring success under the noses of Afghan and NATO officials.

"This is a blow," presidential spokesman Waheed Omar said. "A prison break of this magnitude of course points to a vulnerability."

At least 486 inmates escaped from Sarposa, most of them Taliban fighters, according to Gov. Wesa. The Taliban said they had freed more than 500 of their fellow insurgents and that about 100 of them were commanders — four of them former provincial chiefs.

Government officials declined to provide details on any of the escaped inmates or say whether any were considered high-level commanders.

The highest-profile Taliban inmates would likely not be held at Sarposa. The U.S. keeps detainees it considers a threat at a facility outside of Bagram Air Base in eastern Afghanistan. Other key Taliban prisoners are held by the Afghan government in a high-security wing of the main prison in Kabul.

Pentagon spokesman Col. Dave Lapan said the military command in Afghanistan had "not been asked by the Afghans to provide any assistance" such as intelligence help in looking for the escaped inmates.

Asked if the incident would prompt a rethinking or delay in the planned June turnover of the Parwan detention operation in the east to Afghans, Lapan said: "I think it's still too soon to tell. I have not gotten any indications of that, but it's too soon to tell."

The 1,200-inmate Sarposa prison has been part of a plan to bolster the government's presence in Kandahar. The facility underwent security upgrades and tightened procedures after a brazen 2008 Taliban attack freed 900 prisoners. In that assault, dozens of militants on motorbikes and two suicide bombers attacked the prison. One suicide bomber set off an explosives-laden tanker truck at the prison gate while a second bomber blew open an escape route through a back wall.

Afghan government officials and their NATO backers have repeatedly asserted that the prison has vastly improved security since that attack.

There are guard towers at each corner of the prison compound, which is illuminated at night and protected by a ring of concrete barriers topped with razor wire. The entrance can be reached only by passing through multiple checkpoints and gates.

An Afghan government official familiar with Sarposa prison said that while the external security has been greatly improved, the internal controls were not as strong. He said the Taliban prisoners in Sarposa were very united and would rally together to make demands from their jailers for better treatment or more privileges. He spoke anonymously because he was not authorized to talk to the media.

The Kandahar escape is the latest in a series of high-profile Taliban operations that show the insurgency is fighting back. Over the past year, tens of thousands of U.S. and NATO reinforcements routed the Taliban from many of their southern strongholds, captured leading figures and destroyed weapons caches.

The militants have responded with major attacks across the nation as the spring fighting season has kicked off. In the past two weeks, Taliban agents have launched attacks from inside the Defense Ministry, a Kandahar city police station and a shared Afghan-U.S. military base in the east. In neighboring Helmand province on Saturday, a gunman assassinated the former top civilian chief of Marjah district. That's where U.S. Marines started the renewed push into the south early last year.