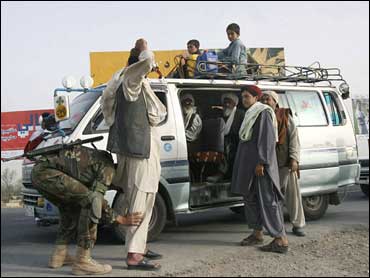 Afghanistan's Ministry of Defense said Tuesday that between 300 and 400 militants - many of them foreigners - had taken over the Arghandab region 10 miles northwest of Kandahar. Afghan officials, fearing a major battle brewing, told residents to leave.

The Taliban have long sought to control Arghandab and the good fighting positions its pomegranate and grape groves offer. With control cemented, militants can easily cross the countryside's flat plains on a decent road network for probing attacks into Kandahar itself, in possible preparation for an assault on their former spiritual home.

Haji Anas, deputy governor of Kandahar, described the situation in the city as calm. He told CBS News from Arghandab, "It is nothing big, we are used to these kind of things. The operation has not started yet and you will witness that they (Taliban) will be defeated."

Anas also dismissed the Taliban's claim of having their fighters inside the city. "The situation is totally under control," he said, adding, "it is impossible for the enemy to deploy any fighters in the city."

Earlier Tuesday, Gen. Aminullah Pakiani, the Afghan commander in Arghandab district, told CBS News there was "no direct threat to Kandahar." He acknowledged a large buildup of Taliban, but said his forces would "get them out of the entire area within a couple of days."

"Recent reports of militant control in the area appear to be unfounded," the statement said.

Coalition spokesman Capt. Christopher Colster said troops patrolled for about five hours on the west side of the Arghandab River - where Afghan officials say the militants are - but didn't make any contact with insurgents. The troops also didn't report seeing civilians fleeing the region, he said.

"Keep your families safe. When there is fighting near your home, stay inside while ANSF (Afghan security forces) defeat the enemies of Afghanistan," NATO spokesman Mark Laity quoted the leaflet as saying.

Despite that message, more than 700 families - meaning perhaps 4,000 people or more - had fled Arghandab, said Sardar Mohammad, a police officer manning a checkpoint on the east side of the Arghandab River.

On the west side of the river, hundreds of Taliban controlled about nine or 10 villages, Mohammad said.

"Last night the people were afraid, and families on tractors, trucks and taxis fled the area," said Mohammad. "Small bridges inside the villages have been destroyed."

The Ministry of Defense - which rushed in some 700 Afghan soldiers, many by air from Kabul - said insurgents got close to a police checkpoint in Arghandab and asked the police to "join them." The ministry said the fact the militants had to use a translator proves that foreign fighters - it didn't say from where - were behind the assault.

Haji Agha Lalai, a provincial council member and the head of the province's reconciliation commission, which brings former insurgents who lay down their weapons back into the folds of society, said the militants were destroying bridges and planting mines as defensive measures in hopes they can repel attacks from Afghan and NATO forces.

"From a strategic military point of view, Arghandab is a very good place for the Taliban," Lalai said. "Arghandab is close to Kandahar city, allowing the Taliban to launch ambushes and attacks more easily than any other place in the province. Secondly, it's covered with trees and gardens - they can easily hide from airstrikes."

The Taliban assault on the outskirts of Kandahar was the latest display of strength by the militants despite a record number of U.S. and NATO troops in the country. The push into Arghandab came three days after a coordinated Taliban attack on Kandahar's prison that freed 400 insurgent fighters.

Police and army soldiers increased security throughout Kandahar and enforced a 10 p.m. curfew.

A Taliban commander named Mullah Ahmedullah called an Associated Press reporter Tuesday and said about 400 Taliban moved into Arghandab from Khakrez, one district to the north. He said some of the militants released in Friday's prison break had joined the assault.

"They told us, 'We want to fight until the death,"' Ahmedullah said. "We've occupied most of the area and it's a good place for fighting. Now we are waiting for the NATO and Afghan forces."

The hardline Taliban regime ousted from power in a 2001 U.S.-led invasion of Afghanistan regarded Kandahar as its main stronghold, and its insurgent supporters are most active in the volatile south of the country.

The U.S. and NATO have pleaded for additional troops over the last year and now have some 65,000 in the country. But the militants are still finding successes the alliance can't counter, a blow to international efforts to stamp out the insurgency.

One of the thousands of Afghans fleeing Arghandab said Tuesday that families were being forced out just as grape groves needed harvesting, meaning financial ruin for thousands. Haji Ibrahim Khan said Taliban fighters were moving through several Arghandab villages with weapons on their shoulders.

"They told us to leave the area within 24 hours because they want to fight foreign and Afghan troops," Khan said. "But within a week we should be harvesting, and we were expecting a good one. Now with this fighting we are deeply worried - the grapes are the only source of income we have."

The assault Monday came one day after President Hamid Karzai angrily told a news conference he would send Afghan troops into Pakistan to hunt down Taliban leaders in response to the militants that cross over from Pakistan.

His spokesman, Humayun Hamidzada, said Tuesday that Karzai does not intend to send troops into Pakistan and was only making "a strong point" that Pakistan needs to crack down on militant safe havens.