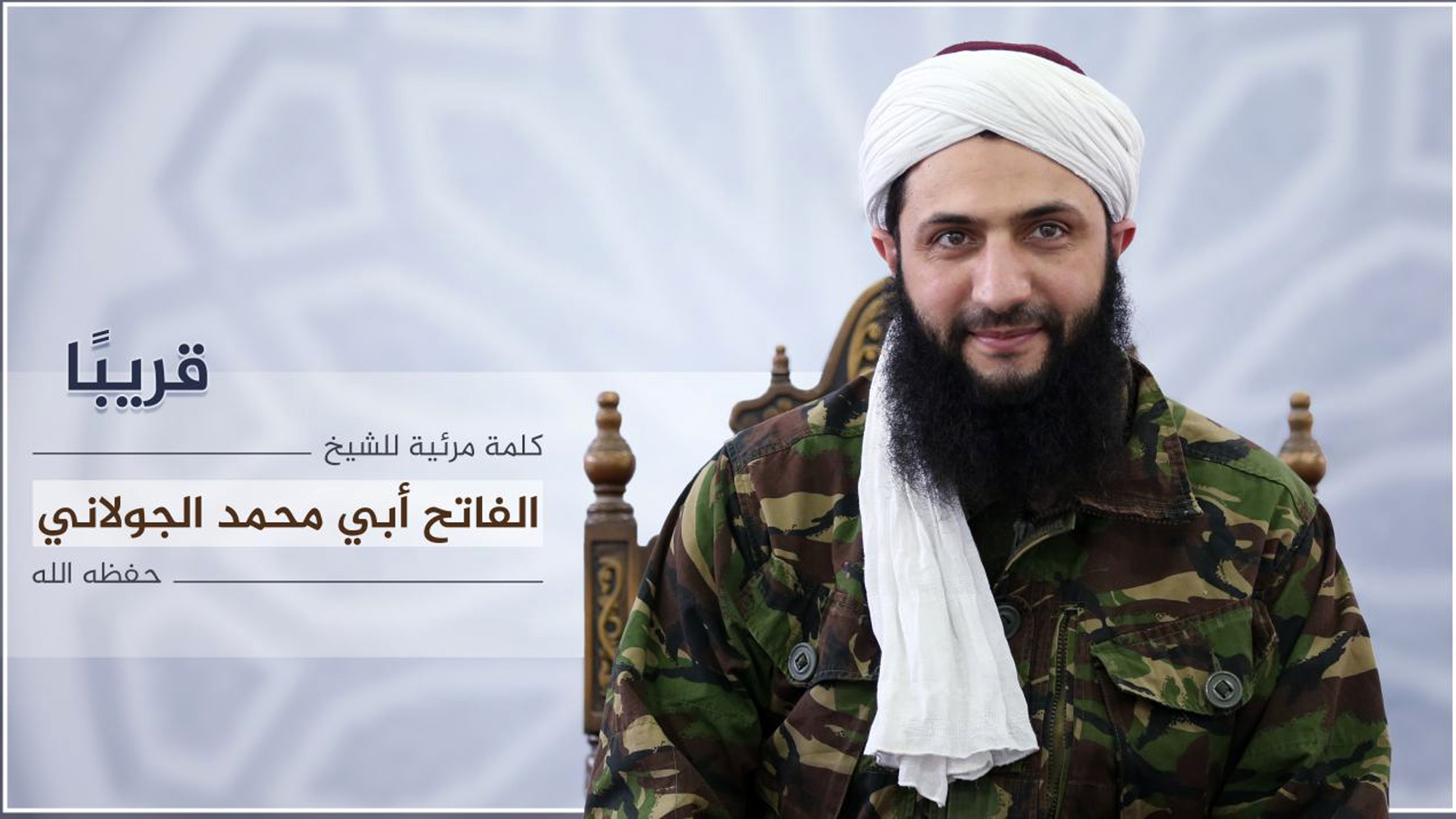 BEIRUT -- The leader of Syria's Nusra Front said in recording aired Thursday that his group is changing its name, claiming it will have no more ties with al Qaeda in an attempt to undermine a potential U.S. and Russian air campaign against its fighters.

The announcement is the first time that an entire branch of al Qaeda has said it is leaving the terror network. But the move took place with the endorsement of al Qaeda's central leadership, and its ideology remains the same, raising questions whether the change really goes beyond the new name, the Levant Conquest Front.

The United States, which considers Nusra a terrorist organization, immediately expressed its skepticism. White House spokesman Josh Earnest said Thursday the U.S. continues to assess that Nusra leaders intend to attack the West and said the U.S.-led military campaign is focused on a number of extremist groups, including Nusra and the Islamic State of Iraq and Syria, or ISIS.

But the step could complicate U.S. efforts in Syria.

Without the al Qaeda name, the group will now seek to expand its alliances with other Syrian rebels, including relative moderates backed by Washington and its allies. Those factions may then oppose international airstrikes against Nusra fighters, arguing that they are now simply fellow rebels against President Bashar Assad, not an al Qaeda affiliate.

Nusra's leader, Abu Mohammed al-Golani, made his first appearance showing his face in the video message, aired on the Syrian opposition station Orient TV and Al-Jazeera.

Sitting between two members of the Front's senior leadership, al-Golani said the delinking from al Qaeda aimed to remove "pretexts" by the U.S. and Russia to strike other rebel groups while claiming they are targeting Nusra.

He underlined the step took place with the blessings of al Qaeda's leadership, and he thanked them for their understanding. He also said the move upholds dictates of Osama bin Laden and was necessary "to protect the Levantine Jihad." Notably, one of those seated next to al-Golani in the video was Ahmed Salama Mabrouk, an al Qaeda veteran who is close to its leader, Ayman al-Zawahri, and who recently came to Syria to join Nusra - a sign of how intertwined the group and the parent organization remain.

"We decided to cancel work under the name of Nusra Front and form a new group under a new front called the Levant Conquest Front. This new front will have no links to any outside groups," he said.

Before his announcement, al Qaeda's central leadership gave its blessing in a message from al-Zawahri's deputy, Ahmed Hassan Abu el-Kheir. He said in an audio file posted online that the Nusra Front should do "whatever protects the interests of Islam and Muslims and protects jihad" in Syria.

He also urged the Nusra Front to unite with other factions against "Crusaders" and form a good "Islamic government."

The message also included a brief comment from al-Zawahri, saying, "The brotherhood of Islam is stronger than any organizational links that change and go away." It was not clear when he made those recorded comments.

Breaking from the al Qaeda brand removes an obstacle to creating a broader alliance with Syrian Islamist rebel factions, Carlino said in an email. It will allow the group "to embed itself more deeply in the Syrian insurgency and to indoctrinate local Syrians to its jihadist ideology, while retaining its long-term goal of establishing Islamic governance in Syria."

Nusra, for example, has been seeking an alliance with the powerful hardline Islamist rebel faction Ahrar al-Sham. But Ahrar al-Sham has been reluctant, seeking to be closer to the Syrian opposition political scene dealing with the West. For example, its leaders approved U.S.-Russia-backed Geneva peace process, though it has not taken part. Nusra's purported break with al Qaeda could ease its reluctance.

Currently, the U.S. and Russia are trying to hammer out an agreement on a new military partnership in Syria. One leaked U.S. proposal would call for a sharing of intelligence and targeting for strikes against ISIS and Nusra on the condition Russia commits to convince its ally Assad to ground Syria's bombers and start a political transition process.

Washington and its allies have been pressing Syrian rebel factions to distance themselves from areas where Nusra is active. But the efforts have had little success, given Nusra's prowess on the battlefield. The attempt to cut a clear line between rebels and Nusra could be even more difficult after Nusra's announcement.

The White House spokesman, Earnest, acknowledged the difficulties, saying it's complex to distinguish between extremist groups and moderate opposition groups and those complexities aren't diminished by Nusra's public denial that it's associated with al Qaeda.

U.S. airstrikes have targeted the group in the past, including a wave of attacks that Washington said hit a cell called the Khorasan Group that was plotting terror attacks abroad.

The Nusra Front was created in January 2012 and emerged as one of the strongest groups fighting against the forces of Assad and his allies, including Lebanon's Hezbollah.

It has also been in a fierce rivalry with ISIS. ISIS leader Abu Bakr al-Baghdadi tried to force Nusra to absorb into his ranks. But al-Golani refused, pledging his allegiance directly to al-Zawahri, who went on to throw al-Baghdadi and his group - at the time al Qaeda's Iraq branch - out of the terror network.

ISIS conquered large parts of Iraq and Syria and declared its own "caliphate," fighting any group - Incluing Nusra and other rebel factions - that refused to submit to its rule. Nusra, in contrast, took a more pragmatic path, forming alliances with other rebels, particularly those with Islamist ideologies.

Although not as brutal as ISIS, Nusra Front militants have been accused in atrocities, including gunning down more than dozen members of the Druze community last summer. They shot an alleged prostitute in the head on camera in front of a group of people in Idlib province and arrested a number of opposition activists earlier this year for taking part in protests. The group has also crushed a couple of U.S.-backed rebel groups, confiscated their weapons and arrested their leaders. It has also been blamed for kidnapping journalists.

Here's a look at the move and what it means:

Did it really leave al Qaeda?

Nusra's leader, Abu Mohammed al-Golani, said in a video announcement that the Front no longer had any ties to an outside group, meaning it is formally no longer a branch. But deep connections remain.

The group retains its Islamic militant ideology and commitment to jihad, and the formal break was carried out with the blessing of al Qaeda's central leadership, which recognized it was needed to protect the group.

The United States immediately expressed skepticism over the announcement, saying it still considers Nusra a threat to the U.S. plotting attacks abroad.

By claiming it is no longer al Qaeda, the Front hopes to deepen its alliances with other Syrian rebel factions, believing that will give it a degree of protection from U.S. and Russian airstrikes.

The group already works alongside some factions, drawn to it because it is one of the most powerful forces fighting the government of Syrian President Bashar Assad. But others have been cooler, like the hardline Islamist Ahrar al-Sham, which has tried to stay closer to the mainstream Syrian opposition.

Impact for the U.S.

The move makes it even harder for the U.S. to draw a clear line between Syrian rebels, who it insists should not be targeted by airstrikes, and militant groups, which are targeted. That line is already hazy, hurting efforts at a peace process.

A U.S.-Russia-backed cease-fire earlier this year did not cover the Nusra Front and the Islamic State of Iraq and Syria, or ISIS, meaning Russian warplanes and Syrian troops could continue to target them. But Russian strikes also hit rebel factions, including ones backed by the United States - even while Moscow argued it was only hitting "terrorists." The cease-fire soon fell apart.

The U.S. and Russia are now trying to hammer out an agreement on a new military partnership in Syria. One leaked U.S. proposal would call for a sharing of intelligence and targeting for strikes against ISIS and Nusra on the condition Russia commits to convince its ally Assad to ground Syria's bombers and start a political transition process.

But if rebels grow closer to an ostensibly "al Qaeda-free" Levant Conquest Front, they are likely to see such an air campaign as just a pretext for Moscow to help Assad defeat insurgents.

Breaking with al Qaeda, even if only in name, also could hurt Nusra: It loses the brand name that drew many of its fighters to its ranks. That could drive away members.

Foreign fighters in particular could become disillusioned since many of them were drawn by the al Qaeda link and see their participation in the Syria war in more universal terms of global jihad rather than as simply a campaign to oust Assad, said Sam Heller, a Beirut-based analyst who writes about the Syria war.