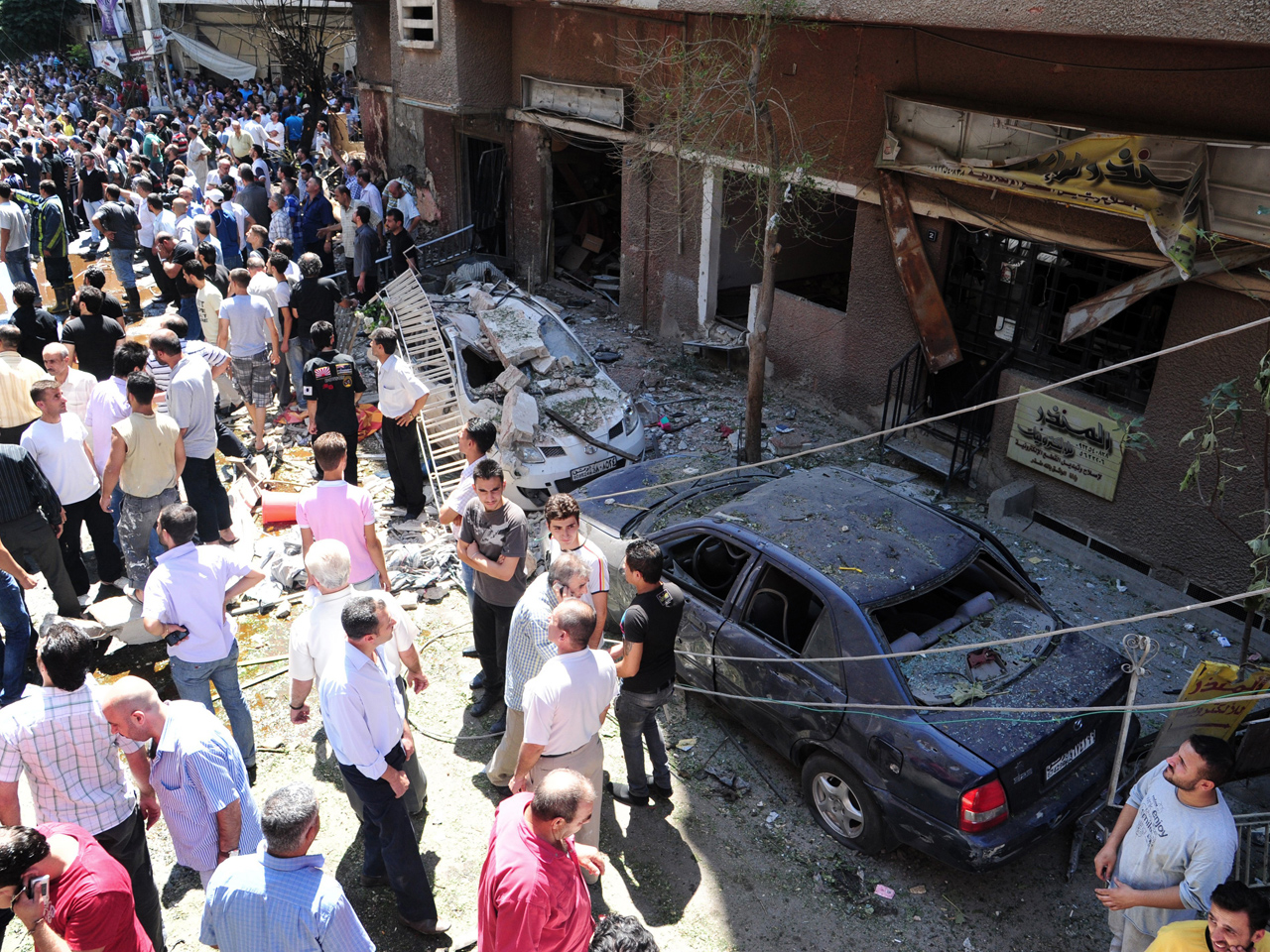 (AP) BEIRUT - The Syrian regime said Monday there will be no dialogue with the opposition before the army crushes the rebels, the latest sign that President Bashar Assad is determined to solve the crisis on the battlefield even if many more of his people have to pay with their lives.

The statement comes a day after activists reported that August was the bloodiest month since the uprising began in March 2011.

"There will be no dialogue with the opposition prior to the Syrian army's imposition of security and stability in all parts of the country," Information Minister Omran al-Zoebi told reporters at a news conference in Damascus.

The opposition has long rejected any talks with the regime until Assad is removed from power.

Muhieddine Lathkani, an opposition figure based in Britain, responded to the minister's comments by saying "the key to any dialogue will be the departure of Assad and dismantling of the regime's security agencies that committed all these crimes."

Lathkani told The Associated Press by telephone that after that happens, there could be a dialogue.

Earlier in the day, the new U.N. envoy to Syria acknowledged that brokering an end to the civil war will be a "very, very difficult" task.

Activists on Sunday said some 5,000 people were killed in August, the highest toll in the 17-month-old uprising and more than three times the monthly average. At the same time, the U.N. children's fund, UNICEF, said 1,600 were killed last week alone, also the highest figure for the entire revolt.

The two major activists groups raised their total death toll for the entire revolt to at least 23,000 and as high as 26,000.

The civil war witnessed a major turning point in August when Assad's forces began widely using air power for the first time to try to put down the revolt. The fighting also reached Syria's largest city, Aleppo, which had been relatively quiet for most of the uprising.

Last week, Assad said in an interview that his armed forces will need time to defeat the rebels, an acknowledgement that his regime is struggling to defeat the tenacious rebels and another indication that the civil war will be even more drawn out and bloody.

In the latest violence on Monday, activists said more than 100 people were killed - many of them in two air raids that knocked out large parts of buildings in the northern province of Aleppo. Government warplanes bombed the town of Al-Bab killing at least 19 people and the Aleppo neighborhood of Myasar where 10 people, including four children, were killed.

The two main activist groups, the British-based Syrian Observatory for Human Rights and the Local Coordination Committees, said the airstrikes targeted a residential area in the northern town of al-Bab, about 20 miles from the Turkish border. The Observatory said 19 people were killed in the air raid; the LCC put the death toll at 25.

An amateur video posted online showed men frantically searching for bodies in the rubble of a white building smashed into a pile of debris. The authenticity of the video could not be independently verified.

An amateur video from Myasar showed men digging through the rubble and cutting metal to pick up the dead buried under the debris. A dead girl and a man were seen being removed in the video.

Hisham Jaber, a retired Lebanese army general who heads a Beirut-based think tank, said the government is using MiG warplanes to bomb targets on the ground with missiles ranging between 110 pounds and 440 pounds.

"Those bombs fall in a shape that looks like a barrel, then explode when they hit the ground," he said.

Syrian officials said a bomb attached to a taxi blew up in the Damascus suburb of Jaramana, killing five people and wounding 23. The officials spoke on condition of anonymity because they were not authorized to brief the media.

Activists, meanwhile, reported scattered violence in regions across the country, including the Damascus suburbs, the region of Deir el-Zour in the east, Daraa in the south and Idlib and Aleppo in the north.

The Observatory said 100 people were killed Monday while the LCC put the number at 205, many of them in Aleppo province.

Diplomatic efforts to solve the seemingly intractable conflict have failed so far. A peace plan by former U.N. Secretary-General Kofi Annan never got off the ground and Annan quit his post as special U.N. envoy. He was replaced Saturday by Lakhdar Brahimi, a 78-year-old former Algerian foreign minister.

Brahimi, who also served as a U.N. envoy to Afghanistan and Iraq, commended Annan on his work, saying he did "everything possible."

"We discussed this several times and I can't think of anything that I would have done differently from him," Brahimi told the BBC in an interview. "It is definitely a very, very difficult mission."

He added that he is "scared of the weight of the responsibility" and that he is "standing in front of a brick wall. ... We'll have to see if we can go around that wall."

Asked whether his task was "Mission Impossible," Brahimi said: "I suppose it is."

In Damascus, Information Minister al-Zoebi pledged that Syria will cooperate with the new U.N. envoy.

"We will give him maximum assistance the way we did with Kofi Annan."

The Assad regime made similar public statements when it signed on to Annan's peace plan, only to frequently ignore or outright violate its commitments by refusing to pull its troops out of cities and cease its shelling of opposition areas.

Al-Zoebi sought to shift some of the responsibility for the future success or failure of Brahimi's mission onto the shoulders of Turkey, Saudi Arabia and Qatar - three of the harshest critics of the Syrian regime and strong supporters of the rebels trying to overthrow Assad.

The three countries, al-Zoebi said, must "stop sending weapons (to rebels) and close training bases," they are hosting.

The Syrian minister did not confirm or deny whether Syrian authorities are holding foreign journalists who entered the country illegally, but said that any person who does so, whether a Syrian or a foreigner, will be referred to judicial authorities.

At least three journalists are missing in Syria and are believed to be held by the regime.

Alhurra TV correspondent Bashar Fahmi, a Jordanian citizen of Palestinian origin, and his Turkish cameraman, Cuneyt Unal, are said to have been captured in the city of Aleppo after entering Syria last month. The third journalist, American Austin Tice, has reported on the conflict for The Washington Post, McClatchy Newspapers and other media outlets, is also reported missing in Syria.

Al-Zoebi also warned against foreign power intervening in Syria, saying "if anyone infringes on our national sovereignty there will be no red lights to our retaliation. ... We will cut such a hand and make them pay a high price."

The West has shown little appetite to intervene in Syria in part because unlike the military intervention that helped bring down Moammar Gadhafi in Libya, the Syrian conflict has the potential to quickly escalate. Damascus has a web of allegiances to powerful forces including Shiite powerhouse Iran and Lebanon's Hezbollah and there are concerns that a military campaign could pull them into a wider regional conflagration.

Western powers, however, have warned Assad against using chemical weapons in the conflict.

On Monday, French Foreign Minister Laurent Fabius said that if Syria uses such weapons, "our response ... would be massive and blistering."

Speaking to RMC radio, he said Western countries are monitoring the movement of the weapons in Syria to be ready to "step in" immediately. Fabius said "we are discussing this notably with our American and English partners."

Al-Zoebi also claimed some of the attacks against individuals and institutions in Syria "had the fingerprints of intelligence services, including Israel's Mossad." He did not elaborate or say which attacks they were allegedly behind.