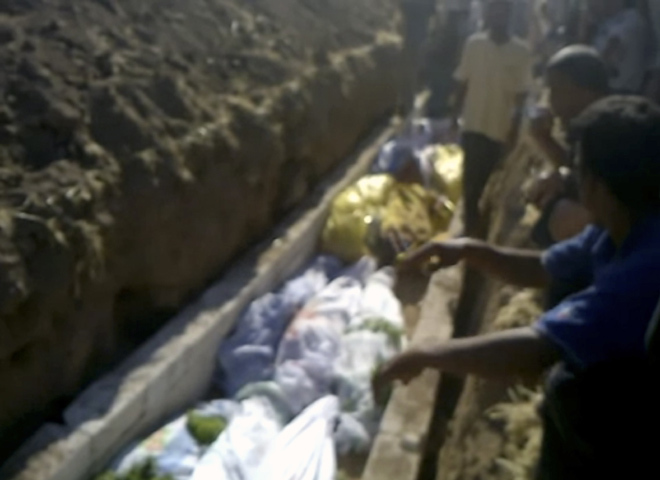 (CBS/AP) The International Committee of the Red Cross said it now considers the conflict in Syria a civil war, meaning international humanitarian law applies throughout the country.

Also known as the rules of war, international humanitarian law grants parties to a conflict the right to use appropriate force to achieve their aims, and the Geneva-based group's assessment is an important reference for those parties to determine how much and what type of force they can use. The assessment also can form the basis for war crimes prosecutions, especially if civilians are attacked or detained enemies are abused or killed.

"We are now talking about a non-international armed conflict in the country," ICRC spokesman Hicham Hassan said.

Previously, the ICRC had restricted its assessment of the scope of the conflict to the hotspots of Idlib, Homs and Hama, but Hassan said the organization had determined the violence has spread beyond those areas.

"Hostilities have spread to other areas of the country," Hassan told The Associated Press. "International humanitarian law applies to all areas where hostilities are taking place."

On Sunday Syria denied claims by U.N. observers that government forces used heavy weapons during a military operation in Tremseh.

Syrian Foreign Ministry spokesman Jihad Makdissi said the violence Thursday was not a massacre, but a military operation targeting armed fighters who had taken control of the village.

"What happened wasn't an attack on civilians," Makdissi told reporters in Damascus. "What has been said about the use of heavy weapons is baseless."

But the United Nations has already implicated President Bashar Assad's forces in the assault. The head of the U.N. observer mission said Friday that monitors stationed near Tremseh saw the army using heavy weaponry and attack helicopters.

On Saturday, U.N. observers investigating the killings found pools of blood in homes and spent bullets, mortars and artillery shells, adding details to the emerging picture of what anti-regime activists have called one of the deadliest events of Syria's uprising. The observers were expected to return to Tremseh on Sunday.

Dozens of people have already been buried in a mass grave, and activists are still struggling to determine the total number of people killed in what they say was a bombardment by government tanks and helicopters on Thursday.

Some of the emerging details suggested that, rather than the outright shelling of civilians that the opposition has depicted, the violence in Tremseh may have been a lopsided fight between the army pursuing the opposition and activists and locals trying to defend the village. Nearly all of the dead are men, including dozens of armed rebels. The U.N. observers said the assault appeared to target specific homes of army defectors or opposition figures.

Running tolls ranged from around 100 to 152, including dozens of bodies buried in neighboring villages or burned beyond recognition. The activists expected the number to rise since hundreds of residents remain unaccounted for, and locals believe bodies remained in nearby fields or were dumped into the Orontes River.

Independent verification of the events is nearly impossible in Syria, one of the Middle East's strictest police states, which bars most media from working in the country. The observers are in the country as part of an all but mordant peace plan by U.N. special envoy Kofi Annan, who has been trying for months to negotiate a solution to Syria's crisis.

The Tremseh violence was the latest in a string of bloody attacks in the now 16-month-old uprising against Assad, in which activists say more than 17,000 people have been killed. The new deaths brought intensified international condemnation of his regime, and the Turkish prime minister added his voice to the chorus Saturday.

"These vicious massacres, these attempts at genocide, these inhuman savageries are nothing but the footsteps of a regime that is on its way out," Recep Tayyip Erdogan said. "Sooner or later, these tyrants with blood on their hands will go and the people of Syria will in the end make them pay."

On Saturday, an 11-vehicle team of U.N. observers entered Tremseh, home to between 6,000-10,000 residents and one of a string of small farming villages along the Orontes River northwest of the city of Hama.

Based on its investigation, the team said in a statement that "an attack" took place on July 12. It said the violence seemed to target the homes of army defectors and activists, some of which were burned or damaged and had pooled or splattered blood and bullet casings inside.