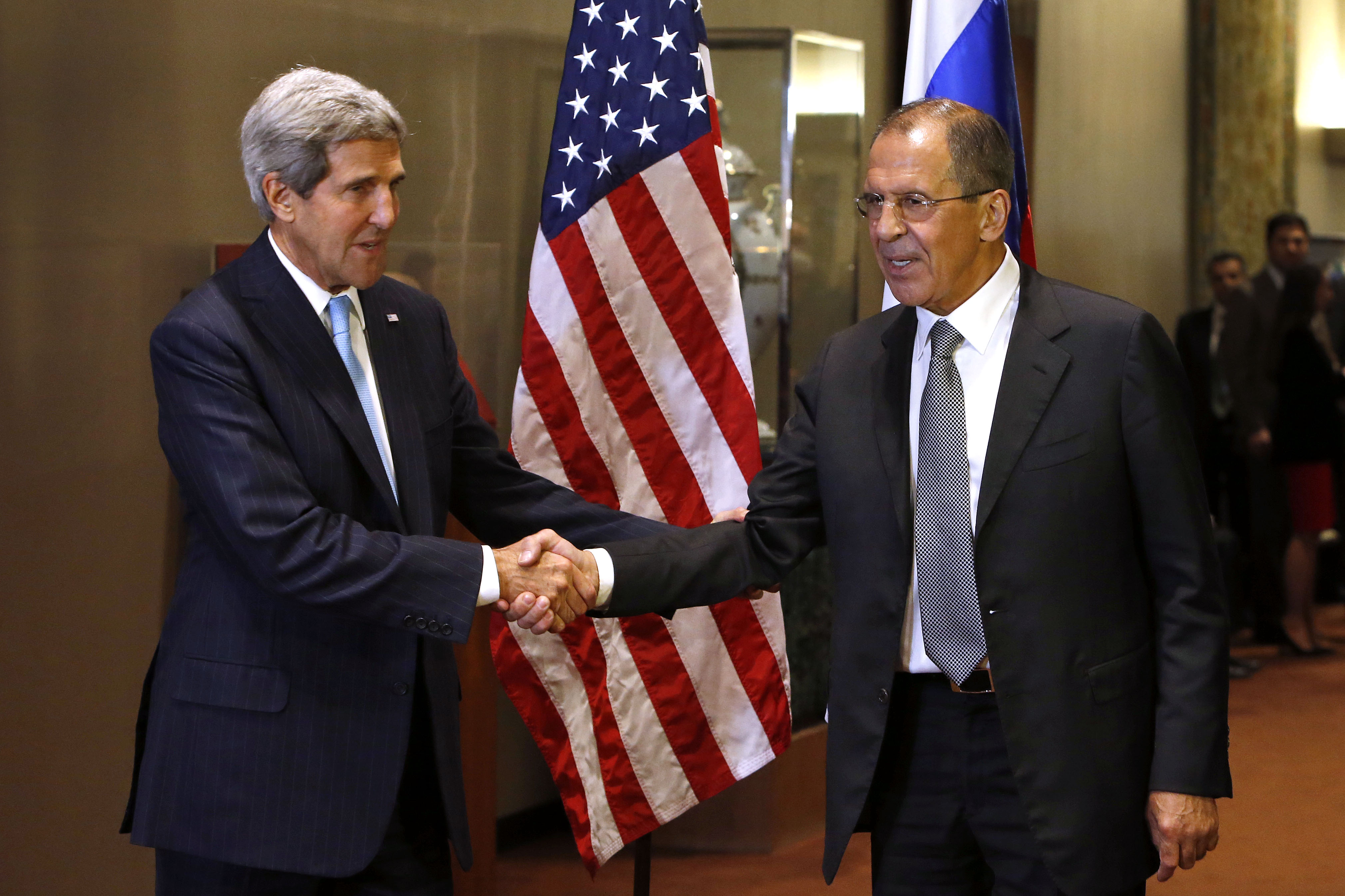 The U.N. Security Council met Thursday evening for informal consultations to consider a breakthrough draft resolution to secure and eliminate Syria's chemical weapons. The agreement -- crafted in large part at the Geneva meeting by U.S. Secretary of State John Kerry and his Russian counterpart, Sergey Lavrov -- will have to be squared with a decision by the Organization for the Prohibition of Chemical Weapons (OPCW), but it is almost certain to receive approval in a full Security Council meeting as early as Friday evening.

A senior Obama administration official said it was the result of "hard-fought diplomacy" and it resolved the multi-year impasse on Syria between the U.S., on one side; and Russia and China on the other.

In an interview with "CBS Evening News" anchor Scott Pelley, Kerry said that the U.S. has not taken the threat of force off the table, but it is not part of the actual resolution or this particular negotiation. The resolution calls for a return to the U.N. Security Council for a second Chapter 7 use of force resolution, if the government of Syrian President Bashar al-Assad does not agree with the timetable.

The draft resolution also establishes a new precedent that chemical weapons are "a threat to international peace and security," setting a new norm that means that any use of chemical weapons should be taken up by the Security Council.

The agreement breaks the stalemate between the U.S. and Russia, and the fact that Russia came around to the U.S. position to put it into a Security Council Resolution makes it binding. But whether or not it is "enforceable" seems to be a matter of disagreement.

A senior Obama administration official called it "binding and enforceable," as did U.K. Ambassador Mark Lyall Grant and U.S. Ambassador to the U.N. Samantha Power. But another diplomat involved in the negotiations said "it is strong language, but it is not a Chapter 7 resolution...it is a compromise. Why the Americans began to say that the Geneva agreement envisioned a Chapter 7 resolution is not easy to understand. This agreement says that the Council returns for an enforceable resolution only if Assad does not comply."

In the important operative clauses, the resolution "determines that the use of chemical weapons anywhere constitutes a threat to international peace and security," which uses the stronger language (determine) and establishes a new benchmark; it condemns the use of chemical weapons in Syria and, in particular, the attack on August 21 as a violation of international law (not blaming the Assad government in particular); and it prohibits Syria from using, developing, acquiring, stockpiling, retaining or transferring chemical weapons to other nations or groups. It adds that all parties in Syria are under the same restrictions.

The resolution puts concrete measures into effect by authorizing an advance team of United Nations personnel to provide early assistance to OPCW activities in Syria and requires those involved in the implementation of the resolution to submit to the Council within 10 days of the adoption of the resolution recommendations regarding the role of the United Nations in eliminating Syria's chemical weapons program and requests the OPCW to report to the Security Council within 30 days and every month any non-compliance.

Without a specific reference to an international tribunal, the resolution expresses its "strong conviction" that individuals responsible for the chemical weapons attacks should be held accountable, and it endorses the concept of a Geneva international conference to establish a transitional governing body with full executive powers.

Finally, it states in strong language (in U.N. terms, "decide" is an action term), that if Syria does not comply with the terms of the resolution, the Council will return to impose measures under the use of force -- Chapter 7 of the U.N. Charter.

The appendices lay out more agreed upon terms to commit the parties to the conflict in Syria to a cessation of armed violence and set forth methods that would allow for humanitarian access.

Along with an historic high level meeting with Iran -- a supporter of the Assad government -- and some progress in Middle East talks, the Syria resolution represents diplomatic progress for the Obama administration, although time will tell if these initiatives work. The next difficult step will be getting the parties in Syria to sit down to negotiate in Geneva.