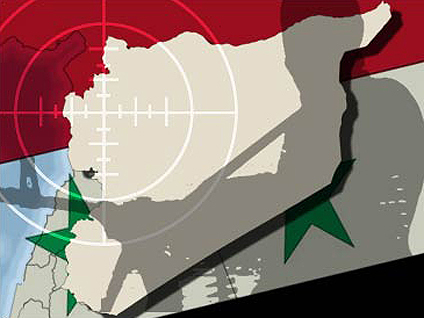 The attack on Ikhbariya TV in the town of Khan Al-Sheeh, about 20 miles southwest of Damascus, occurred early Wednesday morning.

CBS News' George Baghdadi says the Syrian Minister of Information dubbed the attack a "real massacre." The government laid the blame on an unidentified "armed group". According to the Minister, some station staff were tied and tortured before being killed. None of the information could be independently verified by CBS News.

Government officials say three reporters and four security guards were killed in the raid. Another nine employees were injured and seven kidnapped, according to the officials.

Both sides have been accused of exacerbating the spiraling violence in Syria, but the facts surrounding specific incidents and massacres are rarely confirmed, as the Assad regime does not allow independent journalists to work freely inside the country, and a United Nations monitoring mission has been halted due to the risk to its staff.

An employee at the TV station said that the gunmen stormed two of the station's buildings, detained some of the guards then blew up parts of it with explosives.

The employee, who did not give his name for fear of repercussions, said the gunmen blindfolded him then drove him away about 200 yards where he heard the explosion.

"I was terrified," the man said by telephone.

The station came under attack the morning after Assad was seen on Syrian television addressing his cabinet in Damascus, declaring for the first time that his nation was in a "real state of war."

"When we are in a war, all policies and all sides and all sectors need to be directed at winning this war."

Assad has long talked tough on the uprising, frequently referring to the fight against his rule as the work of "foreign terrorists," or simply "armed terrorists." The latest uptick in angry rhetoric may signal a coming step-up in the campaign against the rebels that currently control much of the countryside.

In his speech, Assad also brushed aside calls for him to step down, which are now coming from his neighbors, not just the West.

Turkey, in particular, has changed rapidly from being a close ally to Assad, to firmly opposing his regime after one its reconnaissance jets was shot down over the weekend.

Turkey warned Syria on Tuesday to keep its forces away from the countries' troubled border or risk an armed response -- a furious reply to the downing of a Turkish military plane last week by the Damascus regime.