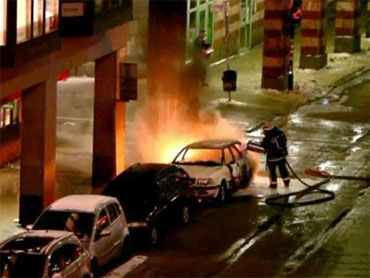 Swedish police said Sunday that two explosions in central Stockholm were an act of terrorism by what appeared to be a suicide bomber, who killed himself and injured two people on a busy shopping street.

Police would not comment on a motive for the Saturday attack. But a Swedish news agency said it received an e-mail threat just before the blast in which the writer claimed to have visited the Middle East "for jihad," and referred to the country's soldiers in Afghanistan and a cartoon of the Prophet Muhammad that outraged the Muslim world.

The terror threat alert in the Nordic country is not being raised, although police are investigating the attacks as "a crime of terror," spokesman Anders Thornberg told reporters.

"When we go through the existing criteria and the series of events that occurred it fits well within the description of a terror crime," Thornberg said. He declined to elaborate.

Swedish Foreign Minister Carl Bildt described the attack as "a most worrying attempt at a terrorist attack." Bildt commented in a Twitter message that it "failed - but could have been truly catastrophic."

Thornberg did not confirm local media reports that the man who died had explosives strapped to his body.

A car exploded in the city center near Drottninggatan, causing panic among Christmas shoppers. Shortly afterward, a second explosion was heard higher up on the same street. The exploded car contained gas canisters, rescue workers said.

Ten minutes before the blasts, Swedish news agency TT received an e-mail saying "the time has come to take action."

According to the news agency, the e-mail referred to Sweden's silence surrounding artist Lars Vilks' 2007 drawing of Muhammad as a dog and to its soldiers in Afghanistan.

"Now your children, daughters and sisters shall die like our brothers and sisters and children are dying," the news agency quoted the e-mail as saying.

According to TT, the man said he visited the Middle East "for jihad," but that he could not tell his wife or child about it.

"I never went to the Middle East to work or to earn money, I went there for jihad," the agency quoted the e-mail.

Police said they were aware of the e-mail, which had also been addressed to Sweden's security police, but couldn't immediately confirm a link to the explosions.

Two people were taken to the hospital with light injuries. It was not clear in which explosion they were hurt.

Sweden - which has so far been spared any large terrorist attacks - raised its terror threat alert level from low to elevated in October because of "a shift in activities" among Swedish-based groups that could be plotting attacks there.

The security police said then that the terrorism threat in Sweden remained low compared to that in other European countries.