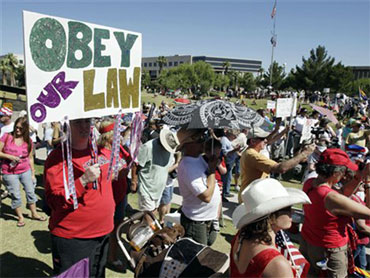 Arizona Sen. Jon Kyl may have been disappointed with District Judge Susan Bolton's decision today to put the most controversial aspects of the Arizona immigration law on hold, but he and many others have praised Bolton for her fairness and expertise.

Bolton was nominated to the United States District Court for the District of Arizona by President Bill Clinton in 2000 at the recommendation of Kyl, the liberal blog ThinkProgress notes.

"There is one person in our state who's a real expert on this in the judiciary, and that's Judge Bolton," Kyl reportedly said during her confirmation hearing. "And because of her expertise and fairness, all of the contending interests from Arizona have been willing to place their concerns before her to be resolved."

Bolton today put portions of the law on hold, including requirements that law enforcement must check a person's immigration status in certain situations and that immigrants carry their identification papers in public. Reaction from Kyl and other conservatives was largely negative.

Kyl and his fellow Ariz. Republican John McCain released a joint statement saying they were "deeply disappointed" in the ruling.

"Instead of wasting tax payer resources filing a lawsuit against Arizona and complaining that the law would be burdensome, the Obama Administration should have focused its efforts on working with Congress to provide the necessary resources to support the state in its efforts to act where the Federal government has failed to take responsibility," they said.

Bolton, who previously served in the Arizona Superior Court for Maricopa County, "has a reputation as a no-nonsense judge," the Arizona Republic reports.

"Everything she does is impeccable," Superior Court Judge Bethany Hicks told the Arizona Republic. "That's kind of her nickname. We call her 'Impeccable' because that's how she is."

"She's smart enough to know that whatever she rules, it's going to be appealed," Fontes said. "She's going to do a good job gathering the facts and making a clear record so the appellate courts can make their ruling."

Arizona Gov. Jan Brewer confirmed today that she will appeal the decision, and the law's supporters say they are confident the law will prevail in court.

"The vast majority of Americans and Arizonans want this law implemented and the judge's action simply circumvents the people's will," said Senate candidate J.D. Hayworth, who is challenging McCain in the Arizona Republican primary. "Laws are made by citizens who are elected to serve in state legislatures and the U.S. Congress, and should not be made by federal judges who are appointed."

More on the court ruling: