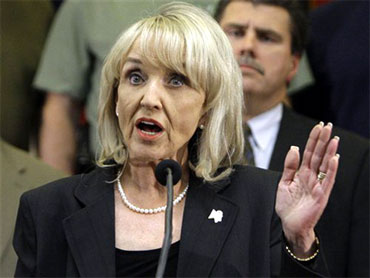 Reaction is starting to come in to a judge's last-minute decision to put the most controversial aspects of the Arizona immigration law on hold, among them requirements that law enforcement must check a person's immigration status in certain situations and that immigrants carry their identification papers in public.

"Incredibly, even though there is not one person who can legitimately claim to be harmed by a law that has not even taken effect, the result of an injunction is de facto amnesty through non-enforcement of laws against illegal immigration," Pinal County Sheriff Paul Babeu and Cochise County Sheriff Larry Dever said in a statement.

They added: "The federal government refuses to secure the border and leaves it to states like Arizona to bear the costs of its inaction. Yet, when we try to do the job they won't do, in a manner consistent with federal law, they stop us. You couldn't make up something this ridiculous."

The message from Attorney General Terry Goddard was far different. Goddard, a Democrat, is running for governor and opposed the Arizona law and the federal government's lawsuit.

"Rather than providing the leadership Arizona needs to solve the immigration problem, Jan Brewer signed a bill she could not defend in court which has led to boycotts, jeopardized our tourism industry and polarized our state," he said. "It is time to look beyond election year grandstanding and begin to repair the damage to Arizona's image and economy."

Brewer herself said she is "disappointed" in the decision though "heartened by some findings" in it. She vowed to soon file an appeal.

"I will battle all the way to the Supreme Court, if necessary, for the right to protect the citizens of Arizona," she said. "Meanwhile, I also know we still have work to do in confronting the fear-mongers, those dealing in hate and lies and economic boycotts that seek to do Arizona harm."

Representative Ann Kirkpatrick, an Arizona Democrat, said "the legal wrangling is just beginning." She predicted "months and months of courtroom battles" at the expense of Arizona taxpayers.

"There are no winners here - no matter what the courts ultimately decide, we will still have wasted millions of dollars and our borders will still not be secure," she said. "The Administration needs to stop pursuing this distraction, and start working with us to get the border region under control and develop a national immigration strategy."

U.S. Senate Candidate J.D. Hayworth, who is challenging Sen. John McCain in the Arizona Republican primary, complained in a statement that the judge "gutted" the law.

"The vast majority of Americans and Arizonans want this law implemented and the judge's action simply circumvents the people's will," he said. "Laws are made by citizens who are elected to serve in state legislatures and the U.S. Congress, and should not be made by federal judges who are appointed."

In a joint statement with Arizona Republican Sen. Jon Kyl, McCain said he is "deeply disappointed" in the ruling.

"Instead of wasting tax payer resources filing a lawsuit against Arizona and complaining that the law would be burdensome, the Obama Administration should have focused its efforts on working with Congress to provide the necessary resources to support the state in its efforts to act where the Federal government has failed to take responsibility," they said.

"I am certain that the Supreme Court would agree that there is no legal recourse or precedent for stopping a state from operating within its rights by asserting its sovereignty in support of immigration laws that the federal government has failed to enforce," he said. "There's nowhere in the Constitution that says a state is limited to what it absolutely won't do and can be stopped for what it might do and to exercise a judgment against a state that has passed a law that is consistent with existing federal law is beyond absurd."

The reaction wasn't all bad: California Democratic Rep. Joe Baca responded with a statement that said "Thank God there is a God."

"Today's decision to block the most extreme aspects of Arizona's SB 1070 upholds the constitution of the United States and helps to ensure respect, dignity, and equal treatment for all people," he said. "The bible tells us to love thy neighbor as thyself. By blocking the most outrageous aspects of Arizona's law from taking effect, this decision is an important victory over fear and hatred."

"We believe the court ruled correctly when it prevented key provisions of SB1070 from taking effect," Justice Department spokesperson Hannah August said. "While we understand the frustration of Arizonans with the broken immigration system, a patchwork of state and local policies would seriously disrupt federal immigration enforcement and would ultimately be counterproductive. States can and do play a role in cooperating with the federal government in its enforcement of the immigration laws, but they must do so within our constitutional framework."

That sentiment was echoed by the Department of Homeland Security.

"The court's decision to enjoin most of SB1070 correctly affirms the federal government's responsibilities in enforcing our nation's immigration laws," said Deputy Press Secretary Matt Chandler. "Over the past eighteen months, this Administration has dedicated unprecedented resources to secure the border, and we will continue to work to take decisive action to disrupt criminal organizations and the networks they exploit. DHS will enforce federal immigration laws in Arizona and around the country in smart, effective ways that focus our resources on criminal aliens who pose a public safety threat and employers who knowingly hire illegal labor, as well as continue to secure our border."