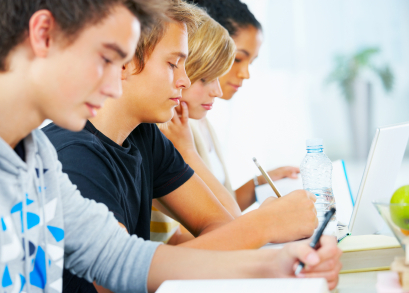 (CBS News) Back-to-school season is just around the corner, and researchers at Columbia University are warning that teens could face added drug and alcohol risks once classes start up.

In its 17th annual back-to-school survey, The National Center on Addiction and Substance Abuse at Columbia University (CASAColumbia) finds that 17 percent of high school students - about 2.8 million U.S. teens - drink, drug and smoke during the school day.

"For millions of American teens, drugs and alcohol, not more advanced education, are what put the 'high' in the high schools they attend," said Joseph A. Califano, Jr., founder and chairman emeritus of CASAColumbia and former US Secretary of Health, Education, and Welfare, in a press release. "For millions of parents trying to raise drug-free kids, the 'high' school years are the most dangerous times their children face, and the 'high' schools are a dangerous place to send their kids."

For the survey, 1,003 12- to 17-year-olds were interviewed at home by telephone, and were asked general questions about their home and academic lives. Students were also asked about their attitudes towards drug, alcohol and tobacco use, whether they or their friends engaged in these behaviors and what role social media played in substance use.

The survey revealed for the sixth straight year that 60 percent of high school students said they attended a "drug-infected" school, where drugs are used or sold on school grounds. Forty-four percent of students said they personally knew a student who sold drugs at their school, with 91 percent of them saying marijuana was the drug that was sold and 24 percent saying prescription drugs, followed by cocaine (9 percent) and ecstasy (7 percent).

The researchers looked closely at the role of social media in teen substance use and found 75 percent of surveyed 12 to 17-year-olds said seeing pictures of teens partying with alcohol or marijuana on social networking sites such as Facebook or MySpace encourages them to party similarly.

Other notable findings suggested that the gap between drug use at public schools and private school was closing, compared to past surveys. For the first time in the survey's history, more than 50 percent of private high school students said their school is drug-infected, up from 36 percent of students in 2011.

Teens who attend religious services at least four times a month were less likely to have used marijuana, alcohol or tobacco.

The survey also suggests teens are still turning to even more dangerous drugs. 52 percent of high schoolers said they knew at least one friend or classmate who used acid, ecstasy, meth, cocaine or heroin; one-third of students knew a peer who abused prescription or over-the-counter drugs to get high.

"The findings are alarming but not surprising," Dr. Bruce Goldman, director of substance abuse services at Zucker Hillside Hospital, in Glen Oaks, N.Y. who was not involved in the survey, told HealthDay. "We know that teens abuse alcohol, cannabis, prescription medications. It makes sense that they do it at school where they congregate with their peers."

The complete report from CASAColumbia can be found here.