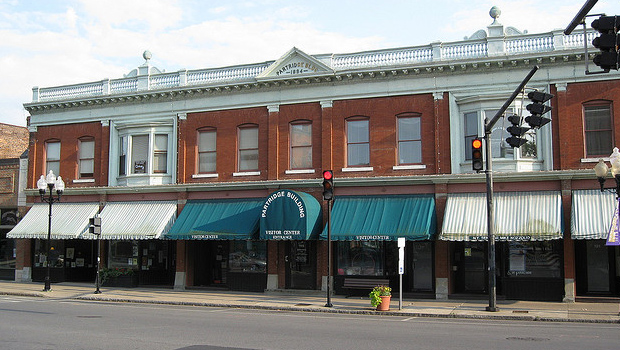 Carmen Wilkerson ran for mayor of St. George with one clear goal in mind for the tiny Missouri town: Get rid of it.

Like many of St. George's 1,200 residents, the paralegal had dreaded the thought of having to pay more taxes for a backlog of road fixes. So she campaigned for mayor in the spring of 2011 with a slogan - "Save Us From Our City" - touting disincorporation. She won, and the following November residents voted by a nearly 3-to-1 margin to dissolve the town.

"Ultimately, it was the money," said Wilkerson. "We had the choice of raising our taxes by $300 per year per household for five years just to replace our streets, or dissolve and have the county do it for a very a small tax increase," she added.

In 2008, St. George - known as a local speed trap - had spent $200,000 more than it took into its coffers, according to county records. That was counting the traffic tickets the small police department was overzealous in issuing.

In its budget woes, St. George is far from alone.

Amid a tough economy, a growing number of small municipalities have had to consider that most extreme of measures - dissolution - to cut costs for local residents. Ten states had fewer townships because of mergers and consolidations, which include dissolutions, between 2007 and 2012, the Census Bureau found in its preliminary 2012 Census of Governments, a count undertaken every five years.

"What is driving a decision is different in every community, but in almost all the cases at this time, it's the economy," said Vicki Brown, one of the researchers at Rochester, N.Y.-based Center for Governmental Research, a consulting firm working with several communities in the country's northeast corner considering dissolution.

A study by an assistant professor at the University of California, Berkeley law school found the past 15 years saw more than half of the dissolutions ever recorded and since 2000, nearly as many municipal governments dissolved as were formed.

"Fiscal strain on local governments has definitely been amplified by the foreclosure crisis that began in 2006, but local fiscal crisis has longer, deeper roots in falling local aid from federal and state governments since the 1980s, anti-tax measures passed in most states since the late 1970s," said Michelle Wilde Anderson, who published a study on towns dissolving in March.

Lack of growth in small communities with the rising cost of services and a shrinking tax base are some of the common issues found among municipalities considering dissolution. Many other towns in trouble also appeared when a certain industry was booming and if that goes away, so does the town's revenues, experts added.

From Tennessee to Indiana and Utah, in the last 10 years, nearly 200 small cities have considered dissolution in 39 states, Anderson found.

The community of Lakewood, Tenn. - numbering more than 2,300 - voted to dissolve in 2010. The borough of Princeton, N.J., merged with another township to save money in 2011. The list goes on.

"Voters or local politicians have decided that they can no longer sustain the costs of a separate local government for their territory," Anderson said.

St. George is not the only town in the 90 municipalities that reside in St. Louis County to be in trouble, but it's the only one that so far has dissolved.

"We do have a number of smaller communities that are struggling because of the economy," Lori J. Fiegel, a county planning manager. "Distribution of tax dollars is based on sales taxes. Per capital distribution of sales taxes has been declining."

The epicenter of dissolutions recently, however, has been in the country's northeast corner.

Eight villages have dissolved in New York between 2008 and 2012. In that same time, 25 villages have considered dissolution, according to the Center for Governmental Research, the consulting firm.

At more than 6,000 people, the village of Seneca Falls became the largest village to dissolve in New York. It merged with the town of Seneca Falls, which meant part-time government positions were eliminated. A full-time village administrator was also let go. But both police departments were merged.

The Town of Seneca Falls now numbers at about 10,000. Like St. George, taxes spelled trouble for the village. Many village residents did not want to have a tax raise for maintenance work.

They were paying $16 per $1,000. After merging with the town, those taxes were lowered to just over $5 per thousand, said Seneca Falls Mayor Don Earle.

"All of the history is the same. Everything is the same," Earle said. "Water, sewer, garbage were serviced without any stoppage."

The spike in dissolutions comes in part as an organized effort by Democratic Gov. Andrew Cuomo's administration, which is trying to consolidate a sprawling web of municipalities in the state as a way to lessen the tax burden on residents, among other reasons.

While dissolving towns can save locals on taxes, it also mean dismantling local governments, cutting jobs and outsourcing services such as the police department. It also means a municipality's revenues, assets, contracts, and debts must be reorganized.

There are several states that don't allow dissolutions, Anderson said, but she still expects that more towns will dissolve.

When Wilkerson took office in 2011 and immediately disposed of the city clerk and city attorney, who had been on St. George's payroll for three decades, she said. A few years earlier the police department, which was made up of four full-timers and a dozen part-timers, had been disbanded. The department had gotten in trouble for less than professional behavior and writing too many traffic tickets.

"There was no reason for us to be a municipality," Wilkerson said of St. George, which hosted only two businesses. "It was there to pay salaries, city attorney, city clerk, road commissioners."

So far the transition into St. Louis County has gone smoothly for St. George. Eventually, the county will have to appropriate more than $1 million to fix the roads, but that will be done later on, Fiegel said.

But not everyone is left happy when a town dissolves.

"We have no law enforcement. We have a community watch. We have to wait a half hour for deputies to come from the county," said Johnny Miller, whose town of Shamrock, Okla. - population about 100 - dissolved in 2010.

Municipalities in trouble have other options as well such as filing for bankruptcy or asking state governments for a bailout.

Earlier this summer, officials of the town of Gold Bar in Washington state floated around the idea of dissolution and the response from the community was swift. The town had been solvent until a slew of public records lawsuits sent the legal bills soaring.

"They didn't arrive with pitchforks and torches but a bunch showed up saying `we don't want to be unincorporated'," said Mayor Joe Beavers.