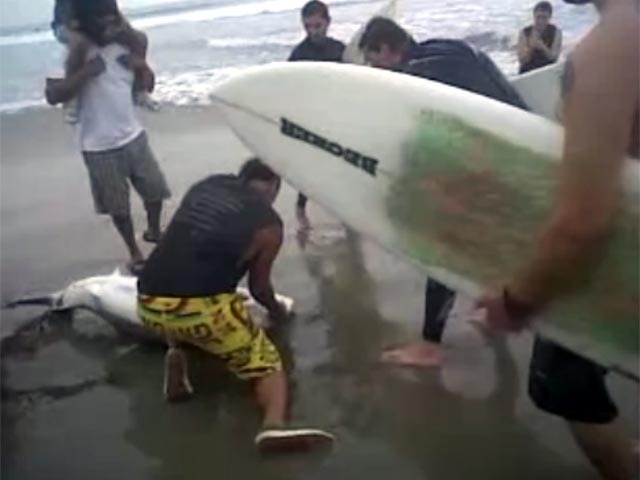 (CBS) - Surfers and sharks may not naturally be the best of friends. But differences were put aside when surfers on California's Venice Pier reportedly found a great white shark pup washed ashore with a hook in its mouth. These quick-thinking beach-goers removed the hook from its mouth and dragged it back out to see. Check out the incredible rescue video above.

As CBS station KCBS reports, the southern California coast is a popular spot for juvenile great white sharks to roam and, well, cut their teeth. It's unclear whether or not the little guy in this video survived, but we have to commend the surfer/heroes who did their best to help.

The Senate has voted to confirm Miguel Cardona as education secretary, clearing his way to lead President Biden's effort to reopen the nation's schools amid the coronavirus pandemic. CBSN's Elaine Quijano reports.

New York Governor Andrew Cuomo has hired criminal defense lawyer Elkan Abramowitz to represent him and his aides in a probe into alleged underreporting of COVID nursing home deaths. The Wall Street Journal reporter Jimmy Vielkind joins CBSN's "Red & Blue" anchor Elaine Quijano with more on how the Cuomo administration is handling the fallout and the latest on the impending investigations into nursing home deaths and allegations of sexual misconduct.

The U.S. now has a third vaccine to fight the coronavirus. Johnson & Johnson began shipping out nearly 4 million doses of its single-dose vaccine after it received emergency use approval from the FDA. Dr. Paul Jarris, a chief medical advisor for MITRE Corporation and the former health commissioner of Vermont, joins CBSN to discuss the latest.

A food bank operating like a grocery store and housed inside a school gives students lessons in respect and retail. Mireya Villarreal shares more.