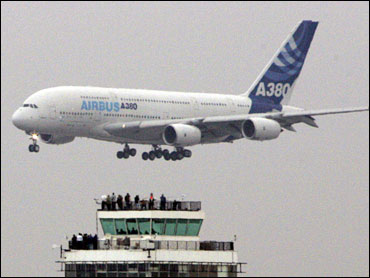 The latest jetliner to claim the title of world's biggest passenger aircraft completed its maiden voyage to America on Monday, flying on football field-length wings and a prayer that the U.S. airline industry will want to buy the double-decker jumbo jet.

The four-engine Airbus A380 touched down at Kennedy International Airport at about 12:10 p.m. EDT, to the cheers of onlookers gathered to watch the arrival. As the plane taxied, a pilot waved an American flag. Minutes later, a separate A380 arrived in Los Angeles, but was devoid of any passengers.

The nearly eight-hour trans-Atlantic flight was a chance for plane builder Airbus and German airline Lufthansa AG to show off the jewel of Airbus' offerings to potential American buyers and to the airports they hope to turn into flight bases for the jet. The 239-foot-long A380 can seat as many as 550 passengers, hold 81,890 gallons of fuel, cruise at 560 mph and fly some 8,000 nautical miles.

Lufthansa Flight 8940 is meant to be a statement by Airbus that it can accommodate vast numbers of travelers comfortably and efficiently.

"We're talking about an airplane that is representing aviation in the 21st century in terms of efficiency," said Jens Bischoff, Lufthansa's vice president for the Americas.

It was one of the highest-profile maiden voyages since 1969, when the Concorde, the world's first and still only commercial supersonic transport, arrived at JFK from London. The European-made Concorde was retired from British and French service in 2005.

Airbus hopes the A380 — designed to carry more people farther than any plane in history, though at subsonic speeds — will dominate air travel for the next two decades.

CBS News correspondent Bob Orr took a video tour of the Airbus 380 in 2001.
See what he found.

Waiting in the wings, however, is Boeing Co., whose 747 jumbo jet has been the world's principal long-haul aircraft for the past 30 years and now has competitors to the A380 in early production.

For Airbus, which has been beset by management and financial problems — including a two-year delay to the A380 that wiped out more than $6.61 billion in profit forecasts — the flight is a chance to prove that the plane will be ready when the first deliveries are made in October to Singapore airlines.

Lufthansa chief pilot Juergen Raps, who has flown the A380 before, said that despite the superjumbo jet's size, it was nimble and responsive.

"If I were to compare it to driving, you would think this would be like driving a truck or a bus," he said inside the plane's cockpit. "It's like driving a Ferrari."

The air show began early Monday at Frankfurt International Airport when the A380 took off as Lufthansa Flight 8940 for the flight to Kennedy. Onboard were 483 people, including four pilots, four Airbus crew members, 23 Lufthansa cabin crew and several hundred passengers, mostly Airbus and Lufthansa employees along with some reporters.

The flight was to operate just as if it were a commercial one with full dining and entertainment services.

After the inaugural run, Lufthansa and Airbus will operate a demonstration flight to Chicago's O'Hare Airport on Tuesday, before returning to New York and then Frankfurt. The plane then heads to Hong Kong and back, before continuing its journey to Washington Dulles International Airport on March 25, with a final stop at Lufthansa's Munich hub on March 28.

Using the performance results from this circuit — flying the plane as it would be done so if it were in service — Lufthansa's goal is to match the A380's turnaround time from landing to takeoff with that of much smaller long-haul jets already in operation.

Airbus has 166 orders from 15 airlines for the new plane, which has already made tests flights in Europe and to Asia.

"We are proud that ... we are now able to present the A380 to the American people," said Mario Heinen, the head of Airbus' A380 program.

The Los Angeles International Airport nearly lost out on the highly anticipated landing of an A380 there after Airbus announced plans to land the jet in New York instead.

The company revised its plan to allow for arrival at both locations. Los Angeles sped up construction of a $9 million gate for the giant gate to accommodate the plane.

Toulouse, France-based Airbus said that plane will perform tests at the California airport, including airfield maneuvers, docking at the terminal gate and ground and gate handling exercises. The Los Angeles airport, the fifth-busiest worldwide, is expected to be the first U.S. destination for the A380 when it enters commercial service.

The flights come as Airbus looks to put what Louis Gallois, co-chief executive of parent company European Aeronautic Defense and Space Co., called "the worst year for Airbus in its life" behind it. Airbus is seeking to recoup its losses by cutting 10,000 jobs and spinning off or closing six of its European manufacturing plants.