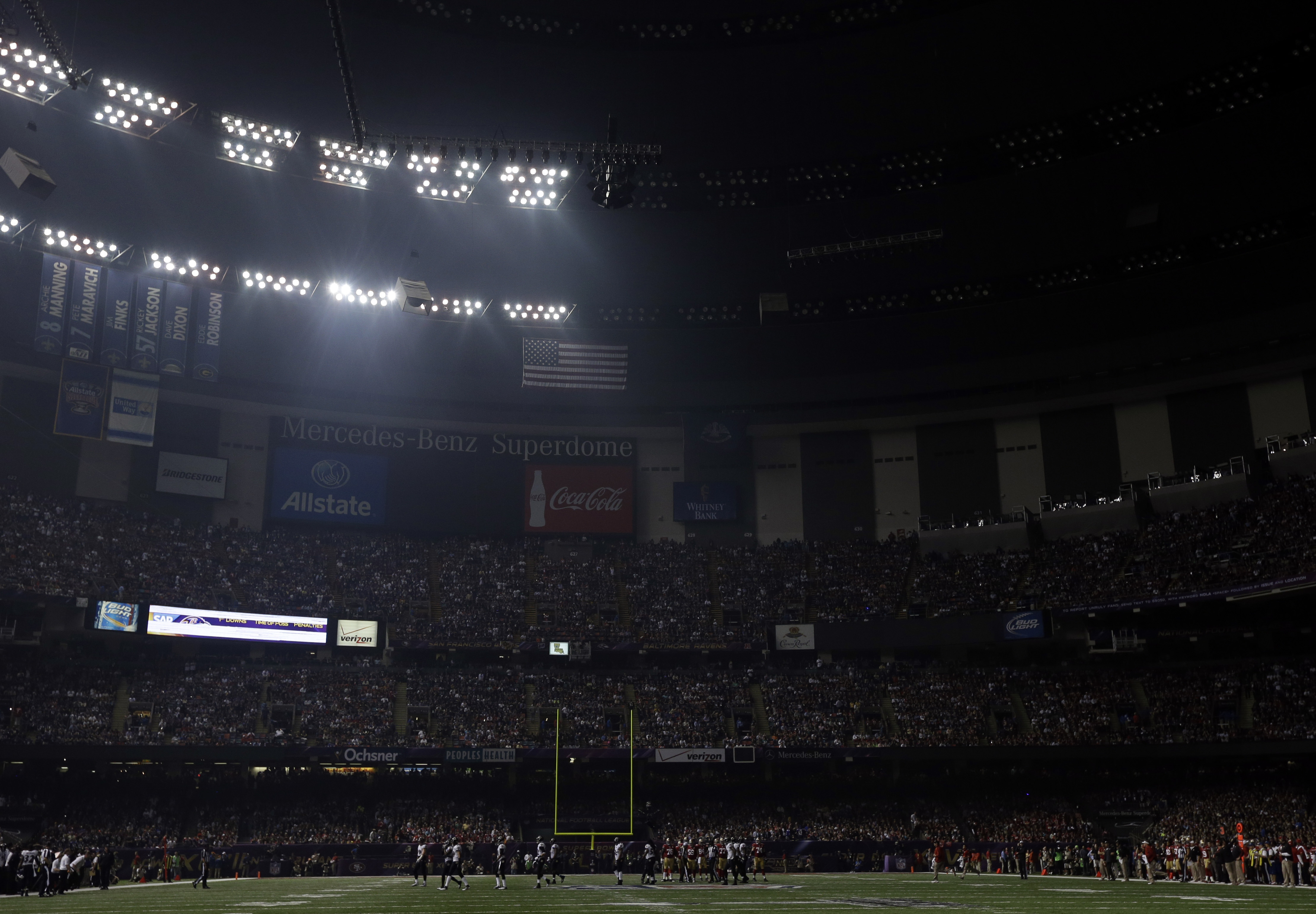 NEW ORLEANS The cause of a 34-minute blackout at the Super Bowl remains under investigation, but public records released Monday show Superdome officials were worried about a power outage several months before the big game.

An Oct. 15 memo released by the Louisiana Stadium & Exposition District, which oversees the Superdome, says tests on the dome's electrical feeders showed they had "some decay and a chance of failure."

Entergy New Orleans, the company that supplies the stadium with power, and the structure's engineering staff "had concerns regarding the reliability of the Dome service from Entergy's connection point to the Dome," the memo says. Those concerns were due in part to "circumstances that have previously occurred with the electrical service regarding transient spikes and loads."

The memo also cites 2011 blackouts that struck Candlestick Park, where the San Francisco 49ers were playing a nationally televised Monday night football game, as a reason for ordering the tests.

The board later authorized spending nearly $1 million on Superdome improvements, including more than $600,000 for upgrading the dome's electrical feeder cable system.

"As discussed in previous board meetings, this enhancement is necessary to maintain both the Superdome and the New Orleans Arena as top tier facilities, and to ensure that we do not experience any electrical issues during the Super Bowl," says a LSED document dated Dec. 19.

An attorney for the state board that oversees the Superdome said the blackout did not appear to be related to the replacement in December of electrical equipment connecting the stadium to Entergy. Officials with the utility and the Superdome noted that an NFL game, the Sugar Bowl and another bowl game were played there in recent weeks with no apparent problems.

Commissioner Roger Goodell said Monday the Superdome had a backup power system which was about to be used during the Super Bowl's electrical outage. It wasn't needed because power started coming back at that time, he said.

Superdome and utility officials were still trying to nail down the precise cause of the 34-minute Super Bowl blackout, but league officials said that, because of the backup system, the game wasn't in danger of being postponed.

"That was not a consideration last night," NFL vice president of business operations Eric Grubman said at a news conference Monday. "That is not what was at play."

Goodell was sitting with New Jersey Gov. Chris Christie during the game. The Meadowlands will host next year's Super Bowl.

The exact cause of Sunday night's blackout -- and who's to blame -- remained unclear late Monday, though a couple of potential culprits had been ruled out.

It wasn't Beyonce's electrifying halftime performance, according to Doug Thornton, manager of the state-owned Superdome, since the singer had her own generator. And it apparently wasn't a case of too much demand for power. Meters showed the 76,000-seat stadium was drawing no more electricity than it does during a typical New Orleans Saints game, Thornton said.

The lights-out game Sunday proved an embarrassment for the Big Easy just when it was hoping to show the rest of the world how far it has come since Hurricane Katrina in 2005. But many fans and residents were forgiving, and officials expressed confidence that the episode wouldn't hurt the city's hopes of hosting the championship again.

To New Orleans' great relief, NFL Commissioner Roger Goodell said the city did a "terrific" job hosting its first pro football championship in the post-Hurricane Katrina era, and added: "I fully expect that we will be back here for Super Bowls."

Fans watching from their living rooms weren't deterred, either. An estimated 108.4 million television viewers saw the Baltimore Ravens beat the San Francisco 49ers 34-31, making it the third most-viewed program in television history. Both the 2010 and 2011 games hit the 111 million mark.

The problem that caused the outage was believed to have happened around the spot where a line that feeds current from Entergy New Orleans connects with the Superdome's electrical system, officials said. But whether the fault lay with the utility or with the Superdome was not clear.

Ravens fan Antonio Prezioso, a Baltimore native who went to the game with his 11-year-old son, said the outage just extended the experience.

"The more time we could spend at the game was a good thing, as long as it ended the way it did," he said, laughing.

The city last hosted the Super Bowl in 2002, and officials were hoping this would serve as the ultimate showcase for the city's recovery since Hurricane Katrina in 2005. The storm tore holes in the roof of the Superdome and caused water damage to its electrical systems, and more than $330 million was spent repairing and upgrading the stadium.

The chairwoman of the New Orleans City Council's Utility Committee has called an emergency meeting for Friday to discuss the power outage.

Jarvis DeBerry, a columnist for nola.com and The Times-Picayune, wrote that the power outage gave the media "an opportunity to laugh at the apparent ineptitude or suggest that the ghosts of Hurricane Katrina were haunting the Superdome."

"That's not the kind of attention the city was looking for, obviously," he wrote, "but it's certainly too soon to say if people will remember the power shortage over San Francisco's furious comeback attempt against Baltimore or if this will harm the city's future opportunities to host the Super Bowl."

Bjorn Hanson, dean of New York University's Center for Hospitality and Sports Management, said the episode shouldn't hurt the city's reputation as a big convention destination. "I think people view it for what it was: an unusual event with a near-record power draw," he said. "It was the equivalent of a circuit breaker flipping."