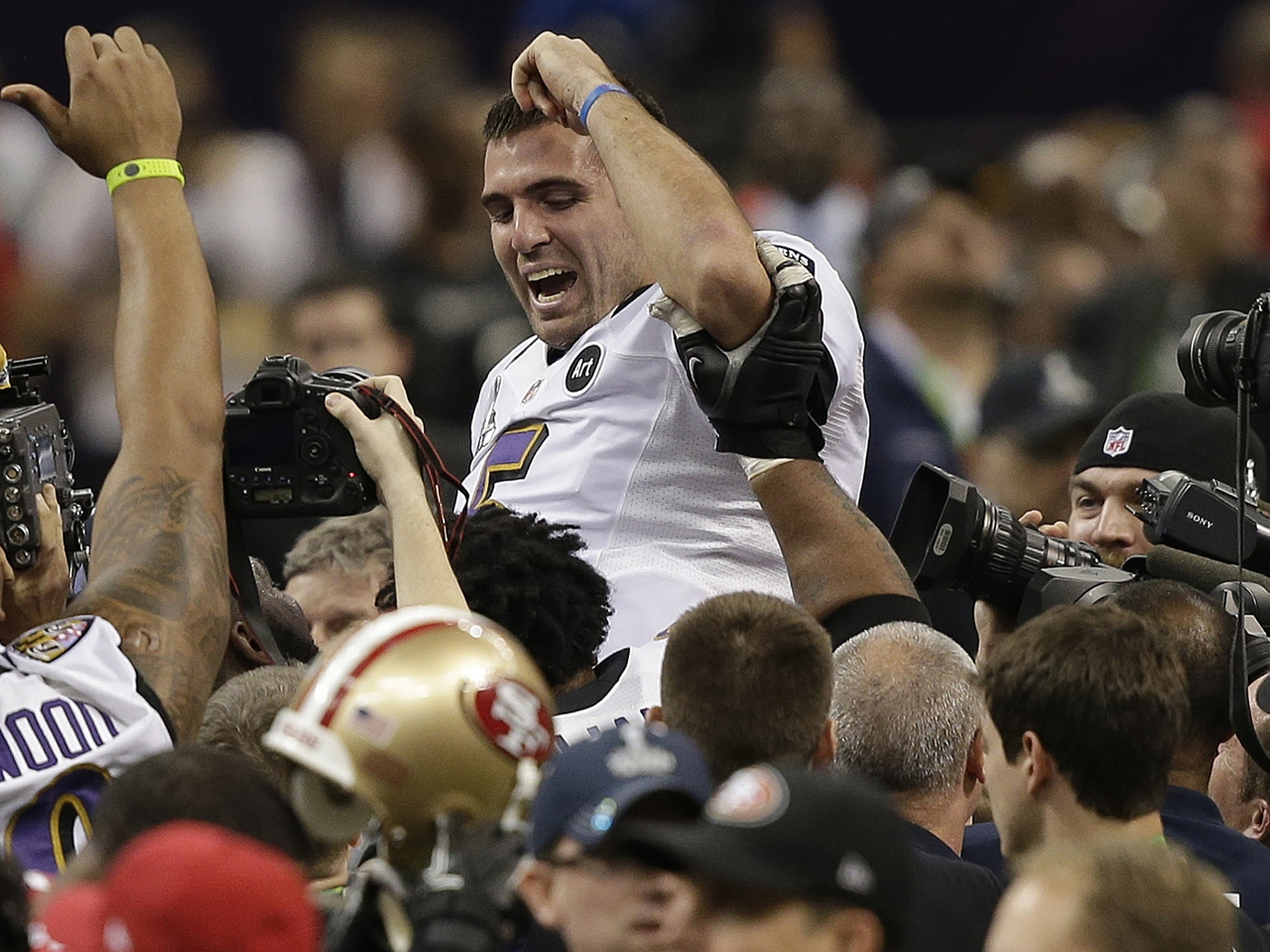 Combine a nail-biting game with a power outage -- and toss in a hyped halftime performance by Beyonce -- and you're likely to score some big ratings.

The Baltimore Ravens' victory over the San Francisco 49ers, broadcast on CBS, fell short of setting a viewership record, but it stands as the third most-watched program in U.S. television history.

The Nielsen Co. said an estimated 108.4 million people watched the Baltimore Ravens' 34-31 victory over the San Francisco 49ers. The most-watched events in U.S. TV history were last year's game, seen by 111.3 million, and the 2010 game, with 111 million viewers.

CBS had hoped to make it the fourth year in a row that football's ultimate game broke the record for most-watched event in American television history. But pro football ratings in general have been down slightly this year.

When the Ravens' Jacoby Jones returned the opening kickoff of the second half for a touchdown and gave his team a 28-6 lead, CBS' dream of a ratings record surely became even more distant. And then half the lights went out. CBS' ratings immediately dipped by two full ratings points in the overnight measurement of big cities.

When the lights returned, so did the 49ers. They quickly jumped back in the game and CBS' audience, no doubt fueled by social media chatter, came back, too. CBS was blessed with the dream of every network that telecasts the Super Bowl: a game that isn't decided until the final play.

CBS had a moment of dead air when the field darkened, since power was lost in the control booth where Jim Nantz and Phil Simms worked. After a commercial break, sideline anchor Steve Tasker appeared to say there had been a power outage. CBS then filled time with its football pregame team, showing highlights and speculating on how the delay would affect the teams.

At the precise moment the lights went out, CBS' Armen Keteyian was in the NFL's control booth, conducting an interview with Frank Supovitz, senior vice president of the NFL in charge of events.

"In the NFL control room, there was no panic, but there was an undeniable amount of uncertainty about the cause," Keteyian said Monday on "CBS This Morning." Keteyian was filming for a "60 Minutes Sports" report scheduled to be aired Wednesday on Showtime. CBS News did not participate in live coverage of the power outage.

The power outage was an immediate hot topic for quips and questions online. There were an estimated 47.7 million social media posts during the game, according to the company Trendrr TV, which tracks activity on Twitter, Facebook and other social networks. That compares with 17 million during last year's game and 3 million in 2010, Trendrr said.

Baltimore had the highest rating of any individual city, Nielsen said. San Francisco was not among the top 10 cities in ratings.

According to The Hollywood Reporter, Super Bowl ratings peaked at a 52.9 rating between 10:30-10:45 p.m. after the 49ers started inching closer to the Ravens.

CBS showcased its freshman drama, "Elementary," to an estimated audience of 20.8 million people after the game. That was markedly down from the 37.6 million who watched "The Voice" on NBC after the 2011 game or the 26.8 million who saw "Glee" on Fox in 2010. CBS noted that the drama did not begin until 11:11 p.m. on the East Coast because of the Superdome power outage.

CBS drew criticism from the Parents Television Council for not editing out a profanity said by Ravens quarterback Joe Flacco shortly after the game. Flacco was caught by microphones describing his team's victory as "f------ awesome."

"No one should be surprised that a jubilant quarterback might use profane language while celebrating a career-defining win, but that is precisely the reason why CBS should have taken some precautions," said Tim Winter, president of the lobbying group, asking for the Federal Communications Commission to rebuke CBS.

The network had no immediate comment Monday on the complaint.

CBS has said it was airing the pregame, postgame and halftime portions of the show on tape delay to guard against the use of bad language or wardrobe malfunctions. The postgame delay does not begin until the first block of commercials after the game, which hadn't happened before Flacco's expletive.

CBS' Craig Ferguson was quick to poke fun at the power outage on his comedy show, which aired after "Elementary." He was shown plugging actress Lucy Liu's cellphone charger into a power outlet at the Superdome, despite instructions not to use it.

"It's one outlet," Ferguson said. "What could possibly go wrong?"

The picture switched to the lights going out in half the dome.