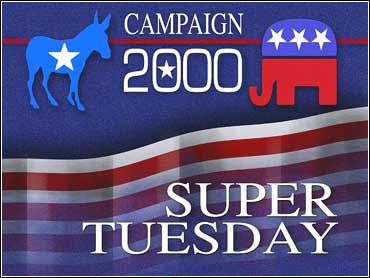 It's finally here - America's long-awaited national presidential primary. By the end of the day Tuesday, voters in 16 states (plus American Samoa) will have cast ballots in a dizzying array of primaries and caucuses that should all but determine who will face off in the general election in November.

Here's a quick look at what's up for grabs:

DEMOCRATS
3 States Have Other Races on the Ballot:
SUPER TUESDAY FACTOIDS

On the Republican side, George Bush won 16 out of 17 of the 1988 Super Tuesday primaries and caucuses - he lost the Washington Caucus to Pat Robertson and Bob Dole. That year, 753 delegates, or 33.3 percent of the total number of delegates, were chosen on Super Tuesday.

In 1996, Bob Dole swept all 10 Super Tuesday primaries and caucuses; 268 delegates, 13.5 percent of the total number of delegates, were chosen that day.

The last time a candidate, in a seriously contested race, swept all the primaries was John F. Kennedy in 1960. Kennedy only entered seven primaries, but he won them all (Wisconsin was closer than expected against Hubert Humphrey but Kennedy won with 56 percent).