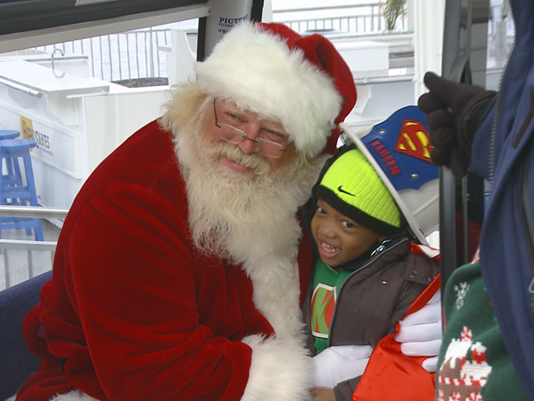 WASHINGTON -- Who needs Batman or Superman, when you have “Super Kaheem” saving the day?

In the D.C. area on Friday, you may have seen a five-year-old named Kaheem, who was transformed into “Super Kaheem,” as part of the Make-A-Wish Foundation, CBS affiliate WUSA reports. The young boy from Owings Mills, Md. is battling leukemia, and had the wish to help others.

After drinking a “magic potion,” Kaheem traveled to National Harbor to save Santa, who was stuck in a Ferris Wheel. Kaheem was brought there in a fire truck, something which had always been a dream of his.

“You can see it in his eyes,” said Santa, just minutes after being saved. “How much he really appreciates it. And how much joy, and how much laughter it puts in his life.”

At the National Harbor, Kaheem was cheered on by dozens, including firefighters from Prince George’s County.

“I didn’t have to ask our firefighters to come do this,” said Mark Brady, from PG Fire and EMS. “They just jumped at the opportunity to participate in the Make-A-Wish.”

After saving Santa, Kaheem hitched a ride with a D.C. Fire boat, on his way to the district. He went to the Capitol, where he received his next mission from House Speaker Paul Ryan. Kaheem’s mom said the whole experience has been overwhelming.

As for the five-year-old, he had just a few words, but tons of laughs.

“It’s been good,” he giggled into WUSA9 microphone.

Kaheem has gotten quite a bit of attention on Social Media using the hashtags “SuperKaheem” and “KaheemSavesDC.”

“Good luck on your mission today,” wrote Vice President Joe Biden. “We’re all rooting for you here at the White House.”

“SuperKaheem is on his way,” wrote House Speaker Paul Ryan.