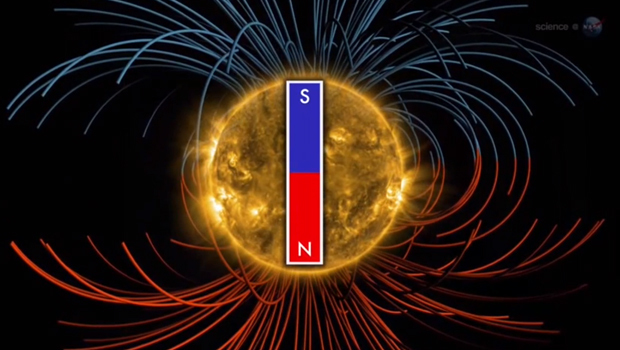 You won't be able to see it, but it might affect the Earth's climate -- the sun's magnetic field is going through a big change.

According to NASA, measurements taken from its supported observatories suggest that the sun's magnetic field is about to flip. But don't panic. This event happens approximately every 11 years.

"It looks like we're no more than 3 to 4 months away from a complete field reversal," solar physicist Todd Hoeksema, director of Stanford University's Wilcox Solar Observatory, said in a statement. "This change will have ripple effects throughout the solar system."

The sun's north and south poles are already beginning to change. Stanford solar physicist Phil Scherrer likens the change to the motion of a wave.

"The sun's polar magnetic fields weaken, go to zero, and then emerge again with the opposite polarity. This is a regular part of the solar cycle,"Scherrer said.

The part of the sun's magnetic field that's set to shift is often called the "current sheet." It's the surface that juts out from the sun's equator, which carries a small electrical current. The amperage flow of this region is about 10,000 kilometers thick and billions of kilometers wide.

Cosmic rays, which are high-energy particles hurtling through space, nearly at light speeds, will also be affected. The current sheet acts like a shield to these rays. During the polarity switch, the wavy sheet becomes a better barrier against these particles.

Scherrer says the sun's two hemispheres are already out of sync, and that the sun's north pole has already started to change, while the south is playing catch-up.