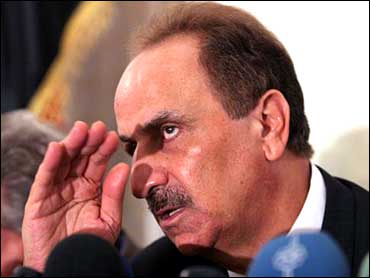 A Sunni Arab politician who brokered secret talks between American officials and insurgents said Wednesday he has formed a group to give political voice to Iraqi fighters, and demanded a timetable for U.S. troop withdrawal.

The announcement from former electricity minister Ayham al-Samarie, a Sunni Arab who is a dual Iraq-U.S. citizen, came a day after President Bush reiterated that disproves of setting a withdrawal timeline and as British Prime Minister Tony Blair stressed the importance of coalition troops remaining in Iraq until the defeat of the insurgency.

The announcement marked the most serious effort to date to draw disenfranchised Sunnis into the political process. Al-Samarie is thought to have strong tribal links throughout the Sunni triangle, where the Sunni branch of the insurgency is concentrated.

Al-Samarie's announcement follows confirmation from American officials including Secretary of Defense Donald H. Rumsfeld that the U.S. has negotiated with insurgents.

Sunnis are thought to make up the backbone of an insurgency that has killed about 1,370 people — mostly civilians and Iraqi forces — since Prime Minister Ibrahim al-Jaafari announced his Shiite-led government April 28.

At a news conference in a Baghdad home, al-Samarie said the new political front, the National Council for Unity and Construction of Iraq, is representing "resistance" fighters who have not carried out attacks against civilians.

Nearly all car bomb and suicide attacks carried out against Iraqis are thought to be the work of Islamic extremist groups such as al Qaeda in Iraq.